Some five years after a U.S. Predator Unmanned Aerial Vehicle flew the type’s first mission over lawless Somalia, the shadowy American-led drone campaign in the Horn of Africa is targeting Islamic militants more ruthlessly than ever.

Thanks to media accounts, indirect official statements, fragmentary crash reports and one complaint by a U.N. monitoring group, we can finally begin to define — however vaguely — the scope and scale of the secret African drone war.

In all, air raids by manned and unmanned U.S. aircraft have killed at least 112 Somali militants, according to a count by the London-based Bureau of Investigative Journalism. Fifty-seven innocent civilians also died in the raids, the nonprofit Bureau found. The dead jihadists have included several senior members of al-Qaeda or the affiliated al-Shabaab extremist group. In January, a drone launched three Hellfire missiles at a convoy near Mogadishu and killed Bilaal al-Barjawi, the mastermind of the 2010 bombing in Kampala, Uganda, that claimed the lives of 74 soccer fans.

In an escalating secret war, drones are doing an ever-greater proportion of the American fighting.

The drones came by land and by sea. Besides Camp Lemonnier, Predators and Reapers operated by the Air Force (and possibly the CIA) deployed to the Seychelles and Ethiopia for flights over the Somalia. It’s been difficult to verify exactly how many drones are present at each base, but Predators and Reapers normally deploy in groups of three or four known as “orbits,” each staffed by around 75 people who launch, land, arm and repair the ‘bots. If all three major known African UAV bases have single orbits, the robot force structure in the region could include as many as 12 Predators and Reapers at a time.

At around the same time the larger drones were settling in, American agents, commandos or contractors in Mogadishu — it’s no clear who, exactly — received an unknown number of five-pound, hand-launched Ravens from manufacturer AeroVironment. The simple, camera-equipped Ravens were ideal for short-range surveillance flights during the urban battles aimed at liberating Mogadishu from militants. In 2011 Washington approved a $45-million package of arms and training to Ugandan peacekeepers in the city that included another four Ravens. 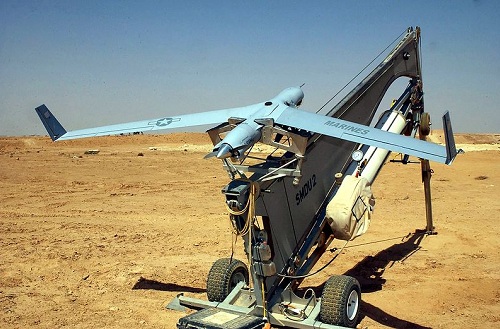 The Fire Scouts initially helped in Navy counter-piracy efforts, but by 2011 had shifted to “overland intelligence, surveillance, reconnaissance … for Special Operations Forces,” according to a recent Navy story. The sailing branch also deployed one of its five RQ-4 Global Hawks — Northrop-built spy drones with the wingspan of a 737 airliner — to an unspecified Indian Ocean base to, among other duties, provide air cover for the 5th Fleet off the Somali coast. And although unmentioned in press reports, Air Force Global Hawks  are also theoretically available for Somalia patrols from their forward base in the United Arab Emirates.


There's much more at the link, including photographs.  Looks like the US armed forces are a lot busier in Africa than we'd been led to believe . . .

The Horn of Africa is a fascinating place. I strongly recommend looking into the on goings such as the Eritrea-Ethiopia conflict (esp interesting to the military aviation buff) and following the US involvement in Somalia after Sep 11.

There was a great article on Reason a couple of weeks ago about how drones have lowered the cost of war (assassination, really) so much that we're now sending drones to go kill people for we would never have bothered to send forces.

War should never be cheap or easy.

I think Dave has a great point about how drones can make war too cheap and too easy, and therefore our leaders may be too eager to use them, yet, I still would much rather put a drone in harm's way over someone who may never return to his or her family.

We lose a drone, we've lost a remote control airplane. True, they aren't all THAT cheap, but when I remember the video of Somalis dragging dead servicemen through Mogadishu, I'd rather the militants being left to sift through inert components than children seeing on CNN why daddy isn't coming home.

You're right, of course, that it's better to lose a piece of equipment than a human life. That doesn't change the original premise that the reduction in cost encourages war.

Think of it this way: when American corpses were dragged through the streets of Mogadishu, there was a political cost. The administration suffered for that, and knew that it would face a similar backlash if more bodies showed up on CNN. The horror of seeing our soldiers treated that way served to put a price on the action, a price that gets weighed when the next "opportunity" to act arises. The public outrage at such things tempers the desire to go to war; ultimately, it saves more lives, both American and foreign.

A drone, as you say, is just a remote-controlled airplane. Build another one and let's go again. (Oh, and those fifty innocent civilians we killed along the way? Tough break, that.)

That's the real cost of drones.