A new tool for snipers


DARPA's Advanced Execution Office (an unfortunate name for a military research department, if ever I heard one!) has announced that prototypes of the latest iteration of its Advanced Sighting System (also known as One Shot) are under development.  The device may enter service within the next few years.

Military snipers may only get one chance to hit their target. The One Shot program seeks to enable snipers to accurately hit targets with the first round, under crosswind conditions, day or night, at the maximum effective range of the weapon.

To achieve this, the One Shot system provides a measured profile of downrange crosswind and range to target. This information is then used to compensate the bullet trajectory to offset crosswind effects and range-related bullet deviations, substantially increasing the probability of first-shot hit.

One Shot XG Phase represents the next-generation of the One Shot system. In previous phases, the program has conducted two development cycles through numerous field tests, government field test verifications and demonstrations to military services. 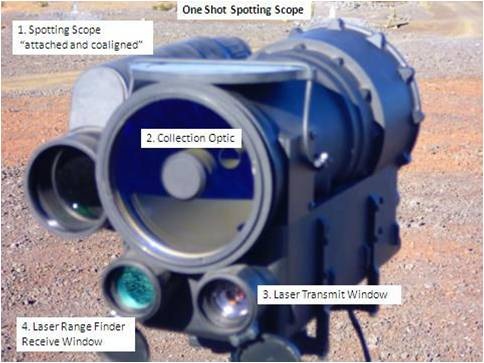 The program should complete Phase 2E in fall 2012, which will reduce system size, weight and power and extend the engagement range.  The Phase 2E system will mount on a conventional spotting scope, and prototypes are expected to be available for field evaluation in fall 2012.

Because of interest expressed by services, One Shot XG is being initiated to create a significantly smaller “field-ready system” that can be “clipped-on” directly to the weapon, eliminating the need for a spotter/observer in future sniper operations.

This next-generation One Shot envisions a compact observation, measurement, and ballistic calculation system mountable on either the weapon or spotting scope.  The system developed will measure all relevant physical phenomena that influence the ballistic trajectory and rapidly calculate and display the offset aim point and confidence metric in the shooter’s riflescope.  The system will provide the ability to see the aim point on the target in either day or night to enable rapid target identification, weapon alignment, measurement of range to target and the crosswind profile.  The XG system seeks to exploit new technologies to operate over a range of visibilities, atmospheric turbulence, scintillation and environmental conditions.

Many of us have had more than enough trouble dealing with snipers equipped with regular scopes on the battlefield.  These look set fair to make the sniper's job a whole lot easier, and our job in avoiding them (not to mention counter-sniper tactics) a whole lot more difficult!  I hope they keep this technology carefully under wraps.  The thought of what a determined terrorist could do with it is not a happy one . . .

A concern about terrorists using this tech is misguided. Well, other than it might up their hit potential to positive numbers!

No, I want to see this in wide spread ownership by our citizens. I want politicians to quake in their boots when photos of this setup are mailed into their office when they misbehave. Like posting photos of rope, tar, feathers, rails, and trees or lamp posts.

Good job Will. We may get to see how these work soon enough:

Our founding fathers were on the money with the second amendment.

I'm not worried about Arab terrorists (the vast majority of the breed) using a sniper rifle and scope. The scope is basically against Islam, since if Allah wills, the bullet will strike, and if not, then not.

I would like to see something like that on one of my rifles, though I'd need to win the lottery first.

Only part I don't like is the bit about spotters becoming obsolete. I seriously doubt that. Otherwise it's
About time you can have a computer equate a firing solution.