Last year we commemorated half a century since the first flight of the prototype of what was to become the CH-47 Chinook heavy-lift helicopter.

Yesterday marked the 50th anniversary of the entry into service of the first production CH-47, on August 16th, 1962.  Would you believe that same helicopter is still in service today?  Flight Global reports:

Currently that aircraft is being remanufactured once again into the latest F-model configuration. "It just came back from Afghanistan, and it's going to go back to Afghanistan probably in the January timeframe," [Boeing business development director for mobility rotorcraft Mark Ballew] says.

Half a century later, there are many original A-model Chinooks that have been remanufactured multiple times, and which have been serving continually since their original roll-out. It is the Chinook's robust tandem-rotor design which allowed the aircraft to evolve over the decades, while lesser aircraft fall by the wayside.

There are a number of advantages to the tandem-rotor concept, Ballew says. Firstly, unlike in a single-rotor machine where horsepower is siphoned off to power the anti-torque rotor, 100% of the engines' output is dedicated to providing lift. That gives the aircraft outstanding high-altitude performance, he says. 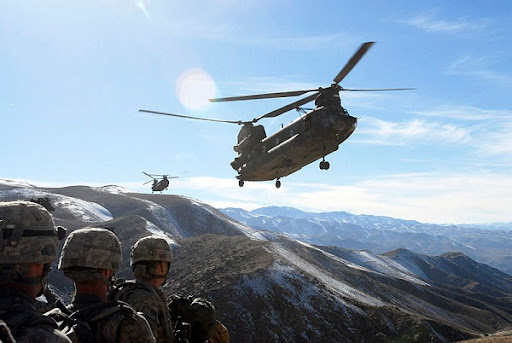 The air flow from the tandem rotors is also cleaner over parts of the airframe in flight, Ballew says. The Chinook also has a large area over which the aircraft's centre of gravity is spread due to its rotor design, he says. That gives the crews more flexibility when loading or unloading the aircraft.

What impresses Bernstein the most is the Chinook's sheer power. It is the helicopter's prodigious power margins and robust design that has enabled it to adapt various roles over the years.

The Chinook is also the fastest helicopter in the US inventory, Bernstein adds. The CH-47 is significantly faster than its escorting gunships, like the Boeing AH-64D Apache.

In places like Iraq and Afghanistan - where large numbers of Chinooks are currently serving - Apache pilots are constantly radioing their charges to slow down. "It was always fun trying to keep up with them," says Bernstein, a former Apache pilot. "They are fast as anything."

It is also extremely versatile. "It's done pretty much every role," Bernstein says. But hauling cargo is where the aircraft excels. The CH-47 was originally intended as a medium-lift machine. But during the Vietnam War, the Chinook proved to be such good cargo hauler that it ultimately replaced the Sikorsky CH-54 Sky Crane as the army's heavy-lifter, he says. But the Chinook has also been used for air assault, as a mobile refueling station, for special operations and even as a gunship.

The Chinook has been upgraded over the years and throughout the various conflicts it has flown in. The aircraft has evolved from the original A-model through to the latest F-model and special operations standard G-model machines.

Over the years, materials and construction has changed. Engines and transmissions have been upgraded and the gross weight has increased. There has also been a quantum leap in avionics technology.

Compared to the original 33,000lb CH-47A, the F- and G-model machines weigh in at over 50,000lbs, and have state-of-the-art avionics. Boeing has added a common avionics architecture system which offers a full glass cockpit - greatly increasing a pilot's situational awareness. The company has also added a digital advanced flight control system (DAFCS), Ballew says, which vastly improves the Chinook's handling characteristics. The DAFCS offers stabilised hover capability, and a pilot can alter his position foot by foot in any direction.

Boeing is continuing to evolve the Chinook. One upcoming feature is a refined rotor blade design which will add 2,000lbs of lift, Ballew says. There are also other ongoing projects to continue improving the aircraft's performance.

The US Army is committed to flying some Chinooks till at least 2050 ...

Here's a video celebrating last year's 50th anniversary of the CH-47's first flight.  I didn't find it at the time, so I think it's appropriate to include it on this 'second 50th anniversary' for the type.  I recommend watching it in full-screen mode.

I guess the CH-47 Chinook is the rotary aircraft equivalent of the C-47 Skytrain, better known in civilian use as the Douglas DC-3 or Dakota.  Given their respective longevity in service, it's peculiarly appropriate that they share the same designation number, isn't it?

One hellva chopper! And like the Huey, they'll be around for ever! :-)

The old versions were sometimes called $hithooks because they didn't fly well with a load in hot weather. The newer series have power to spare.

The only thing that would scare old pilots is the don't leak hydraulic fluid any more. If it was leaking you knew if still had some fluid in the system.

Here's link to a pilot showing what the aircraft is capable of.

Try that with an Osprey!

Two more very long serving war horses to be proud of are the C-130Hercules and the Boeing B-52. All four of these classics were in the active inventory when I was in Vietnam 66-68.