A nude challenge to political correctness


It seems that Prince Harry's embarrassment over his, er, over-exposure during a party in Las Vegas is stirring up controversy in the British Army.  It was reported a few days ago that he'd face a 'dressing-down' (you should pardon the expression) when he returns to active duty.  Now it seems that others in the UK armed forces aren't very happy about this - and they're expressing their support with a bunch of bare-naked royal salutes!  The Telegraph reports:

Scores of soldiers and their wives are risking Army anger by stripping off and saluting to show support for Prince Harry, and posting the pictures on Facebook.

As our troops get naked to copy Army comrade Prince Harry's nude Vegas party pose, their wives and girlfriends are getting in on the act too.

They are borrowing their boys' uniforms and performing 'naked salutes' either totally nude or in varying states of undress.

They are among over 13,000 who have joined a military Facebook group called 'Support Prince Harry With A Naked Salute'. 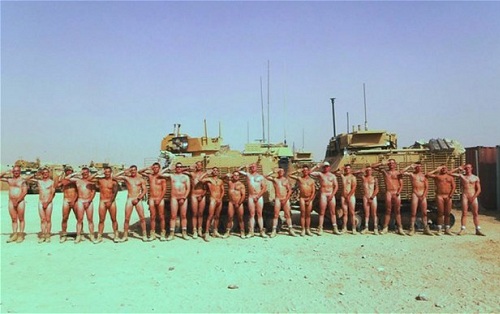 But although none of the troops are likely to be disciplined for the stunt, top brass are not amused.

A source told the Daily Mail: "Everyone sees the funny side but there are people at senior levels in the Army who do not consider this to be appropriate.

"They will be thinking 'Does this really shows us in the professional light we want to be seen in?'."


There's more at the link.  The Sun also has a collection of photographs of the 'royal salutes'.

Sure, Harry was an idiot to let himself go like that, particularly knowing that every gossip columnist and paparazzo in the world would be just waiting for the merest hint of a slip-up . . . but I'm delighted to see that the average Brit can still thumb his or her nose (and other body parts) at snooty top brass!

I think it's also a demonstration that these soldiers consider Harry one of their own.

And that speaks more for the young man's character than a lot of endorsements I could think of.

I'm wishing the American Armed Forces had that much balls--er, no pun intended. ;)

I'm waiting for a comment from his Uncle HRH the Duke Randy Andy. I'm anticipating that it will be something like "9/10".

The MSM can get stuffed, as they say in Her Majesty's Scapter'd Isle.

And can I just second the comments from both AD and Wraith?

That's what I'm taking away from it too. Good sign