This year has seen a bumper harvest of famous warships rediscovered. We've already looked at HMS Hunter and HMAS Sydney in these pages, and seen how modern imaging sonar can reveal hitherto unforeseen details of ships at the bottom of the sea.

The latest discoveries are of HMS Exeter, a York-class heavy cruiser: 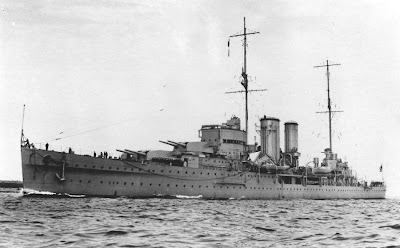 and HMS Encounter, an E-class destroyer. 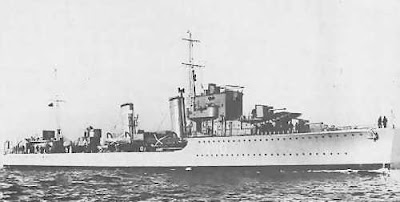 Both Royal Navy vessels were sunk by Japanese forces in 1942 during the Second Battle of the Java Sea.

HMS Exeter is famous for her role in the Battle of the River Plate in 1939, the first major naval action of the Second World War, in which she and two Leander-class light cruisers, HMS Ajax and HMS (later HMNZS) Achilles, took on the German pocket battleship Admiral Graf Spee. Exeter drew the brunt of the German ship's fire, sustaining heavy damage from the enemy's much superior armament of 11-inch guns (versus her 8-inch and the Leander cruisers' 6-inch guns). Her damage is shown below. 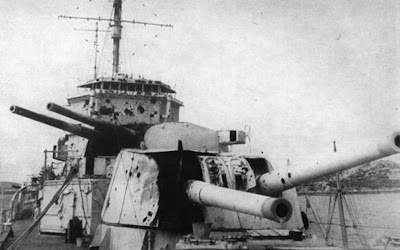 Nevertheless, Exeter, Ajax and Achilles forced the German ship to retreat to neutral waters, where she was later scuttled. The squadron commander, Commodore Harwood, was promoted to Rear-Admiral. There's an excellent BBC program on the battle, available on YouTube in five parts. Click each to view: Part One; Part Two; Part Three; Part Four; and Part Five. Together they're 47 minutes long.

After an extensive refit, Exeter served briefly in the European theater before being sent to the Far East. Upon the Japanese initiation of hostilities, she was assigned to ABDACOM to defend the Dutch colonies in South-East Asia, serving with US, Australian and Dutch vessels. She was heavily damaged in the First Battle of the Java Sea, when ABDACOM attempted to intercept a Japanese invasion convoy, and forced to retire to Surabaya for temporary repairs.

Two days later Exeter, escorted by Encounter and a US destroyer, USS Pope, tried to reach the Sunda Strait. They were intercepted by a vastly superior Japanese force of four heavy cruisers and five destroyers, leading to the Second Battle of the Java Sea. After a brief but unequal fight, all three Allied ships were sunk. Most of Exeter's crew survived, to be taken prisoner by the Japanese. The photograph below, showing Exeter sinking, was taken by a Japanese spotting plane. Her bow, at the bottom of the picture, shows the damage caused by a Japanese torpedo, which had nearly severed it. 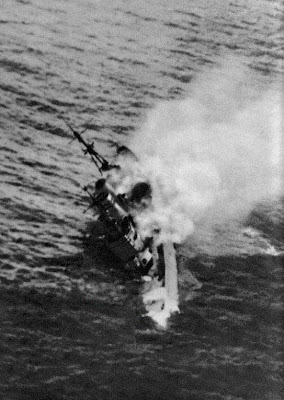 The two warships were found in Indonesian waters, at a depth of about 200ft, 90 miles north of Bawean Island, and 60 miles from the sinking position given by Exeter's captain, Oliver Gordon, in a book written after the war.

Exeter's discovery follows a six-year search and means the last of the Second World War's most celebrated warships sunk in the conflict has now been located.

Examinations of the wreck have provided historians with vital new insights into the ship's final battle, one of the war's least known naval encounters.

The divers, for instance, found many of its guns were at low elevation, indicating how close in the Japanese ships had got, and the extent to which Exeter was encircled and outgunned.

They also discovered the extent of the damage to the ship, testimony not only to the ferocity of fire it faced in its final moments but also to its remarkable resilience and ability to withstand enemy attacks that had served it well in its monumental battle against the Graf Spee earlier in the war.

Underwater photographs of the wreck of HMS Exeter may be found at this Web site. In tribute to those who died aboard her, a Royal Navy ensign was fastened to her torpedo tubes, to fly underwater. 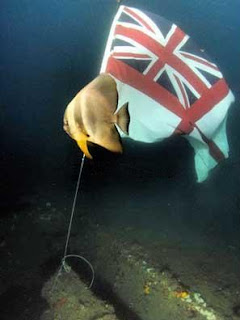 The name of the ship is continued today by the present HMS Exeter, a Type 42 destroyer of the Royal Navy.

I think that present and former US Marines will be particularly interested in this discovery, as the ships share their motto: Semper Fidelis.