A balletic dash to freedom


On this day, June 17th, 1961, the Russian ballet dancer Rudolf Nureyev made his famous dash to freedom at Le Bourget airport in Paris. 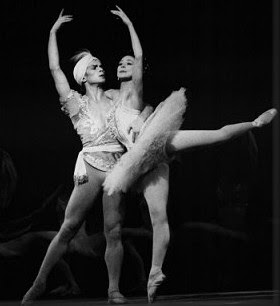 Principal dancer of the Kirov Ballet, Rudolf Nureyev, has broken free from Russian embassy guards at a Paris airport and requested asylum in France.

The 23-year-old Russian dancer dashed through a security barrier at Le Bourget airport shouting in English: "I want to be free."

It is understood Nureyev was approached by two Russian guards as he was waiting, with the rest of his troupe, to board a BEA Vanguard plane to London.

The guards informed him that he was required to return to Moscow instead of going to London, but, as he was being escorted to a waiting Russian aircraft, he made his dash for freedom.

He was taken into the airport police station by two French police officers, followed by the two furious Russian guards, and a heated argument ensued.

He was immediately granted temporary asylum in France and his case was referred to the Office for the Protection of Refugees and Stateless Persons.

The Leningrad Kirov Ballet troupe continued their journey to London without their principal dancer.

Many of the younger generation have no memory - and, thanks to lax schooling, little understanding - of the evils of Communism and how much damage it did to so many uncounted billions of people all over the world.

It's worth reminding them that many found the system so onerous that they were prepared to abandon everything - family, friends, their familiar language and culture - to make a new start, in freedom. Some succeeded. Many others died in the attempt.

Freedom is worth it. Let's make sure we never surrender it to a totalitarian State. It's the individual that counts, not the masses. Anyone who tells you otherwise is either deluded, or just plain evil.

My family is one of those who chose "to abandon everything - family, friends, their familiar language and culture - to make a new start, in freedom." I'd like to say, it was well worth it.

However, it saddens me, to watch people throwing away, little by little, our freedoms and sovereignty.

Maybe the phrase "easy come, easy go" applies to the generation(s) throwing it away?

Anyway, I really enjoy your blog, keep up the good work!