If there's a quintessential doofus, this guy is it. In spades. 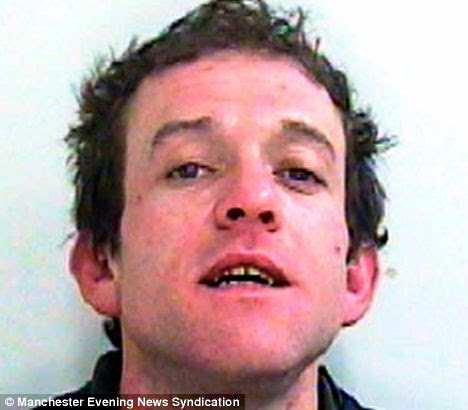 A burglar has been branded the 'dumbest of the dumb' after returning to the scene of his crime - to ask if he could have his dropped mobile phone back.

When he realised he had left it behind, he went back to the house and asked the 74-year-old: 'I'm the person who broke in - can I have my mobile phone back?'

Today Gardner was branded the 'dumbest of the dumb' as he began three years and three months in jail.

It emerged it was not the first time he had dropped his property during raids and left it behind.

One police officer said: 'This guy has to be as dumb as you get. It's pretty damning to leave a calling a card at the scene of your crime by dropping stuff but to return and then ask the victim for it back takes the biscuit.

'Some of the guys at the police station were in stitches when they found out what happened. This burglar must either have a serious lack of brain cells or a serious lot of front.'

At the time of the burglaries in February, Gardner was on bail after being arrested for a break-in at commercial premises and the theft of copper cable.

He had been caught after leaving a tobacco pouch with his fingerprints at the scene of another of the crimes.

In court Gardner admitted three burglaries and theft, and asked for a further 12 burglaries to be taken into consideration.

He had 44 previous offences on his record and was liable for a statutory minimum three-year sentence, the court heard.

I have only one question.

With intelligence such as he displayed in his most recent caper, how the heck did he manage to pull off 44 previous offences???

"Watson, the stumbling step you hear approaching is that of our burglar. This shall be the easiest case I have ever solved. Assuming that he doesn't accidentally kill himself, first."

"Notice the way the furniture has been pushed to the side with no apparent purpose. This was not planned, but is the work of an extraordinary klutz. Now he approaches the wrong door. He realizes something is not quite right."

A stutter step. "Ow!" Then rapping on the door.

"He is here, Watson. If you just open the door quickly and yell 'Boo,' he will probably demonstrate an incapacitating pratfall for us. If you ever write of my involvement in this I shall die of embarrassment."