A novel way to relieve stress


I was intrigued to read of the 'destruction therapy' offered by a group of businessmen in Castejon, Spain. The latest instalment was held this past weekend.

We’ve all felt the urge to let go and release our inner maniac, especially at work. Unfortunately, the boss isn’t going to be very forgiving if he comes back from lunch to find you’ve taken a crowbar to the photocopier after one jam too many. For most, frustrations like these are just a part of modern-day life, but for three Spanish entrepreneurs, they were a gap in the market. In 2003, Jorge Arribas, Francisco Pérez and Hani Charwani founded Destructoterapia (destruction therapy), to help people take out their rage on the tools of office existence, albeit outdoors in a supervised environment. 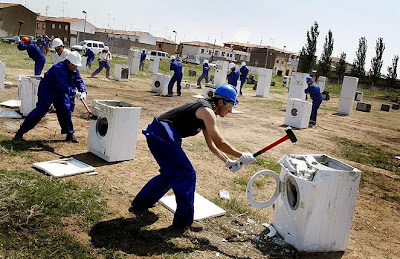 So how does the ‘therapy’ work? It’s pretty straightforward. ‘Patients’ are offered a variety of tools with which to break things and a slew of things to break. With guidance from Destructoterapia employees, they go through a series of violent actions to release the beast within. “It’s a safe and controlled way to liberate stress and anger without hurting or shouting at people around you, like your family, friends or colleagues,” says founder Charwani. He calls it “supervised anti-violence”. The idea is that the destruction therapy helps relieve pent up physical tension and, after a while, the act of destruction becomes something of a game. Sessions are usually about one hour long and cost €200 to €300 per group, and although the Destructoterapia team is based in Soria, in central Spain, they’ll travel to requested locations. If your head needs seeing to, there are also licensed psychologists available on-site, though mostly these sessions simply revolve around smashing things up. 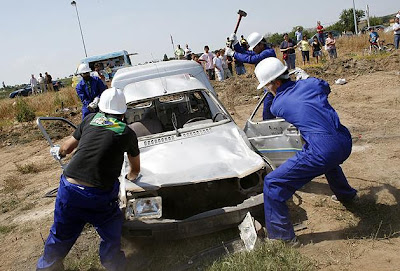 If this sounds like a butch activity, it’s not just men who feel the need to wield a sledgehammer. About 40% of participants are women. Cars are the most popular items to smash, says Charwani, followed by computers and phones. Although clients aren’t allowed to bring along their own items to destroy “due to safety measures,” they put in a request for objects to break before they arrive. The rules? The object needs to be causing you personal stress. And – just in case this needs clarification – it has to be inanimate. Your boss is not fair game. 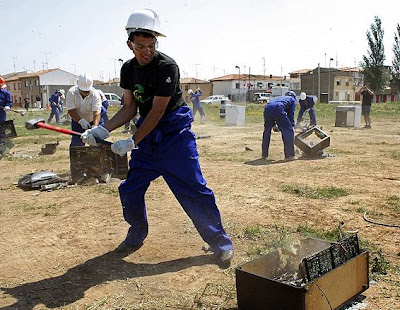 When groups schedule a session, the Destructoterapia gang buys the materials from stores or junkyards, or scavenges for already-broken equipment. Then, when the ‘patients’ arrive, they’re kitted out in hard hats, boots, goggles and fetching blue overalls. Once properly attired, they’re let loose on the objects, venting their spleen to heavy metal or rock. Local thrashers El Petardo Infecto have proved a particular favourite. 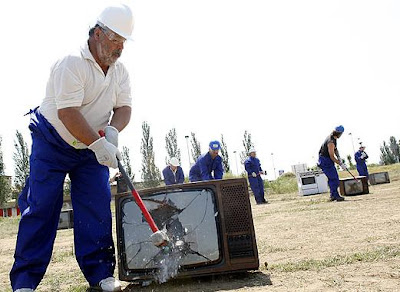 The company most often finds themselves hosting these sessions of all-out mayhem for corporate teams. Apparently it’s extra-therapeutic to break the things that stress you out around the people who stress you out. Just don’t try taking a swing at that waste of space from accounts.

Looks like everyone was having a good time! This video clip of the 2005 event gives a more graphic presentation.

I wonder if they'd let me attend, using my shotgun instead of a sledgehammer?

Shotgun? I'm bringing my Mauser and a pound or two of Tannerite :)

Heh. Just thinking about it is calming.

One of the best parts of my job is that it lets me play with large, destructive power tools. The satisfaction derived from hammer drilling a 3 inch wide hole thru a foot thick concrete wall...ahhhh.