I'm always saddened to hear of the killing of police officers, prison guards and other security personnel. They're on the front lines of keeping us safe, and risk their lives so that ours are as little threatened as possible. Having worked part-time and full-time with law enforcement officers of various agencies, I think I have some little understanding of how stressful and dangerous their lives can be.

I'd like to ask you to spare a thought - and a prayer - for Donna Fitzgerald, who was murdered in the line of duty last week. 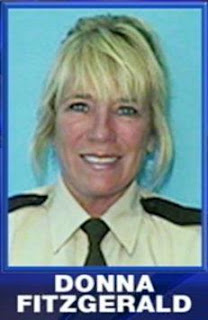 I've wanted to blog about it since then, but having served as a prison chaplain, I found it hard to find the words. It really hurts when a comrade - even one you've never met - dies like this.

DAYTONA BEACH, Fla. -- An inmate at the Tomoka Correctional Institution was quickly transferred to the Florida State Prison on Thursday after officials said he killed a prison guard.

Authorities identified the inmate as Enoch Hall, 39, who was sentenced to life in prison for sexual battery with a weapon and kidnapping charges in 1993. He had been at the facility since 1994.

The officer, Donna Fitzgerald, 50, was a veteran guard, who had worked at Tomoka Correctional Institution for 15 years.

Hall hid in a welding shed adjacent to the Pride workshop area with a knife made out of a piece of sheet metal, police said. Pride is a vocational training facility located at the prison.

Officials at the prison said Fitzgerald entered the shed around 7:30 p.m. Wednesday looking for Hall.

When she discovered him hiding, Fitzgerald confronted Hall and was stabbed multiple times, police said.

Subsequent news reports indicate that Officer Fitzgerald was raped before being murdered.

As for Hall, he seems to be one of those whose lives are a waste of oxygen.

Enoch Hall was serving a life sentence for a rape in the '90s.

He first showed up in the system in June 1988. That year it was burglary plus a stolen car.

In 1990, the charge was battery on a law enforcement officer two days before Christmas.

This time the charge was sexual battery with a deadly weapon and kidnapping.

For those two offenses, he was sentenced to life in prison.

Hall has spent nearly all of his 14 years in prison at Tomoka.

Dear friends, as you read these words, consider this.

Right now, there are tens of thousands of law enforcement and corrections personnel putting their lives on the line for you.

Without them, more vicious predators like Hall would be roaming the streets.

When one of them pays the supreme price in your defense . . . remember them.

They're the reason you sleep more safely at night.

May Almighty God have mercy on the soul of Donna Fitzgerald, and receive her into His peace.

This was completely unnecessary. Rape used to be a capital crime (these days, raping a little kid does not seem to merit death, according to the highest muckety-mucks- betcha they'd think differently if it were their kin...).
Rape (prevention of same) is still justification for deadly force, hereabouts....... I'm thinking that proper application of about 9 cents worth of lead, primer and powder in 1992 or 1993 would have saved much anguish, many hundreds of thousands of the Public's Dollars, and, at the very least, Donna Fitzgerald's life......

Bless Donna Fitzgerald, and bless all who risk their own lives daily for the safety of us all.

As a Correctional Officer it breaks my heart to see such stories.People should Thank God for Correctional officers. And the job they do.

Hopefully the creatin will not be wasting space much longer.

May Ms. Fitzgerald rest in peace.

I AM A CORRECTIONAL OFFICER WITH TAYLOR CORRECTIONAL WHO JUST HEARD OF OFFICER FITZGERALDS UNTIMELY DEATH HER FAMILY IS IN OUR PRAYERS AND IN OUR HEARTS MAY SHE REST IN PEACE IN THE LORDS LOVING EMBRACE.