They built a monument to WHAT???


I'm still shaking my head in disbelief at this news report.

A monument to the enema, a procedure many people would rather not think about, has been unveiled at a spa in the southern Russian city of Zheleznovodsk.

The bronze syringe bulb, which weighs 800 pounds (363 kilograms) and is held by three angels, was unveiled at the Mashuk-Akva Term spa, the spa's director said Thursday.

"There is no kitsch or obscenity, it is a successful work of art," Alexander Kharchenko said. "An enema is almost a symbol of our region." 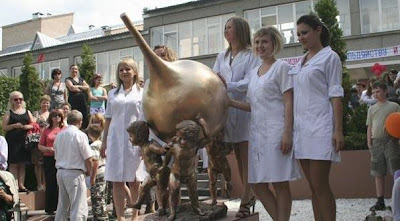 The Caucasus Mountains region is known for dozens of spas where enemas with water from mineral springs are routinely administered to treat digestive and other complaints.

Sculptor Svetlana Avakina said she designed the 5-foot (1.52-meter)-high monument with "irony and humor" and modeled the angels on those in works by Italian Renaissance painter Alessandro Botticelli.

"This device is eternal, it will never change," she said. "We could promote this brand, turn it into a franchise with souvenirs and awards for medical doctors."

A monument? To the enema?

Oh, well. And here's me thinking that an innuendo was an Italian suppository . . .