I'm sure many readers have heard of the dams formed by recent earthquakes in China. For those who may not have heard the full story, this report gives alarming details:

One of the tragic ironies of the recent earthquake in China is that it has created numerous new, extremely dangerous dams in a country that already is the most dam populated country on earth. At more than 85,000 dams and counting, Chinese leaders already boast of having the tallest dams, the largest by reservoir capacity, the dam with the highest ship lift, and the most powerful electricity producer. From arch dams, earthen dams, and gravity dams to cascade and concrete-faced rockfill dams, China has it all.

Now, in the wake of the May 12 Sichuan quake, China has more dams than it may be able to handle. The new dams in question are the so-called “quake lakes”—34 at last count, of which 28 threaten to burst (China Daily, June 1). These quake lakes have been created by massive landslides into China’s river system. The landslides are serving as perverse “natural” dams; behind these quake lakes, water is rapidly building up.

The clear and present danger is a subsequent breach that sends a flood of water hurtling toward villages and towns downriver. In the worst case scenario, this flood of water would, in turn, knock out other dams damaged by the quake and create a disaster every bit as damaging as the original quake. After the quake, as many as 391 hydroelectric dams in five provinces are in "dangerous condition," stated the National Development and Reform Commission, the nation's top economic planning agency. As an indicator of the severity in some situations, Tan Li, the Communist Party secretary of Mianyang and head of the city's earthquake control and relief headquarters, ordered that 1.3 million people should evacuate the area and move to higher ground (Xinhua News Agency, May 30; China Daily, June 1).

In fact, China is no stranger to such dam disasters. Exhibit A for such a problem is the Banqiao Dam, which was originally built in the early 1950s. When cracks were found in the dam and its sluices, they were dutifully repaired and reinforced by Soviet engineers, after which the Banqiao was dubbed the “iron dam.” Like the Titanic, it was supposed to be indestructible. Then, in 1975, Typhoon Nina hit.

In just a few short days, Nina rained down a mind-boggling 63-inch deluge. At times, it poured 6 inches per hour. Under this onslaught, the smaller, upriver Shimantan Dam broke first and sent a wall of water crashing down toward the “indestructible” Banqiao. Half an hour later, the Banqiao was crested and collapsed. 20 foot high waves rushed downstream at speeds of up to 30 miles per hour. In the process, these waves wiped out 60 more dams along the way.

The death toll from the Banqiao collapse was staggering. More than 200,000 people died—a third from the initial flooding and the rest from famine and disease as the breach effectively isolated millions of people from basic communications and transportation networks.

The report is much longer - the above is just an extract. It's worth reading the whole thing.

An associated problem is the threat of very serious pollution if the 'quake dams' let go, and take others with them. According to an article in the International Herald Tribune:

Heavy rain and five thousand tons of dangerous chemicals are adding to the mix of threats from one of China's "quake lakes," which is in danger of bursting its banks, a newspaper reported Thursday.

Illustrating the sense of urgency, the Finance Ministry said it was funneling an extra 1 billion yuan, or $144 million, into relief work on an estimated 35 quake lakes in addition to 400 million yuan already allotted to work on damaged dams.

About 5,000 tons of chemicals, including sulfuric and hydrochloric acid, were downstream from the Tangjiashan quake lake and had to be moved to safe ground, said the newspaper, the Beijing News, citing the local environmental authorities.

Chemicals were also the source of another problem, when a fire broke out in the earthquake-shattered town of Beichuan, injuring 61 soldiers. State-run television showed smoke billowing over the town and reported that a stockpile of bleach being used to disinfect quake ruins had ignited in a storage building. Footage showed soldiers spraying down the building and extinguishing the threat followed by video of medics treating several soldiers who were gasping for air.

"The soldiers have inhaled the fumes, it has affected their bodies and they are in the military hospital now," said a soldier, identified in the video as the leader of the fire crew. His name was not given.

I've heard from people I trust, who know the area. They tell me that the five thousand tons of chemicals mentioned in the IHT report are only the tip of the iceberg. There are thousands of factories and plants downstream of the flooded areas, many using chemicals and processes that are toxic in the extreme. One correspondent said to me that if all the chemicals and pollutants he knows to be in the area are released into a flood, they're potentially poisonous enough to wipe out all fresh-water life between the quake area and the sea as they flow down the rivers. That, of course, would also pollute - at least temporarily, and perhaps longer-term - the fresh water supply to most of central and southern China.

All this is happening as China prepares to host the Olympic Games in August, starting less than two months from today. The nation's already in crisis mode dealing with almost 70,000 deaths and almost 20,000 still missing in the aftermath of the earthquakes. If catastrophic flooding and pollution of its major rivers follows, the Olympics may be overwhelmed by the sheer scale of the disaster.

Troops are doing their best to drain the 'quake lakes', digging diversion channels for the water - sometimes at the expense of construction equipment drowned by the rush of water, as shown in this photograph. 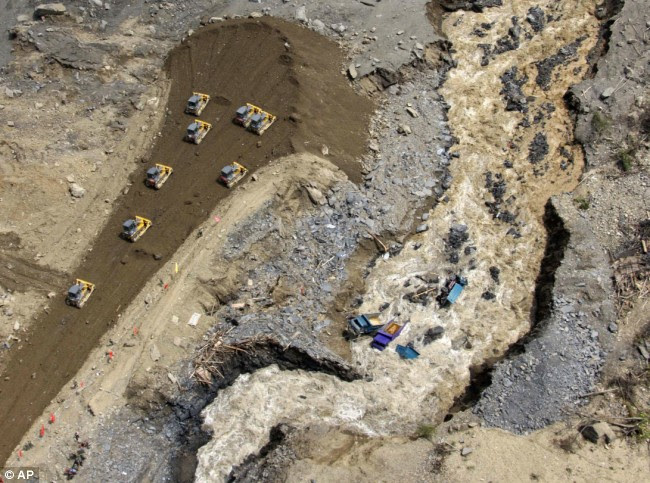 Chinese soldiers used anti-tank weapons to blast away rocks and mud holding back waters in an earthquake-formed lake that threatens more than 1 million people living downstream.

Troops dislodged enough debris to speed the drainage of waters in Tangjiashan lake, although the level continued to rise with the inflow from the blocked river behind the dam.

Another 120 troops were sent to continue the operations today.

Early Monday, the water level had reached more than 6ft above a spillway carved into the dam last week to divert water and release pressure on the unstable dam wall.

Authorities were on alert both for increased rainfall and new aftershocks that could weaken the dam or send more debris plunging into the lake.

David Petley, a geography professor at the University of Durham, warned the situation at the lake appeared to be reaching crisis levels.

"The teams on the dam are fighting a desperate battle now," Petley said. "The outcome is very uncertain."

Rising water levels indicate the outflow is not fast enough, he said.

At the same time, news photos show that the top of the dam is holding, instead of eroding slowly as it should, while the channel further down was eroding too quickly.

That could place increased pressure on the dam by suddenly sucking down large volumes of water, overwhelming the barrier, Prof Petley added.

"I am increasingly concerned about the state of play as the level of the lake continues to rise and the channel at the crest of the dam does not appear to be eroding," he said.

If any readers are planning to visit China for the Olympic Games, I'd suggest that you keep a very careful eye on the situation. If things go as badly as they might, your plans might warrant re-examination. Meanwhile, let's hope and pray that the Chinese authorities can mobilize sufficient resources to do whatever's needed to prevent such a catastrophe.

Um, scratch that last comment- it was in poor taste and not funny. Just call me crass.

It's one thing when our own machinations and constructs come back to bite us in the arse, collectively, but when mother nature decides to put us in our place, things go wobbly on an whole other order, entirely. Perhaps at moments like that, we'd best look to the insects for their stalwart drive to rebuild and press on.

It's one thing to think of adults with fully realized lives who've taken a stab at their own potential, and another entirely to consider the wee ones in their care who have not made their mark on the world and have not had opportunity to be the ones who make things better for their fellow men.

Come to that, it's a reminder that we all should make the most of every day of our lives.

I'm glad to know you, Peter. Thanks for the profound truths your blog makes me to consider, robbing time from my busy schedule of nail polish and onion-peelings...

You totally rock. The rest of my day will be better because of you.