One of Britain's dumbest has been caught on camera, stealing from an unmarked police car - for the third time. 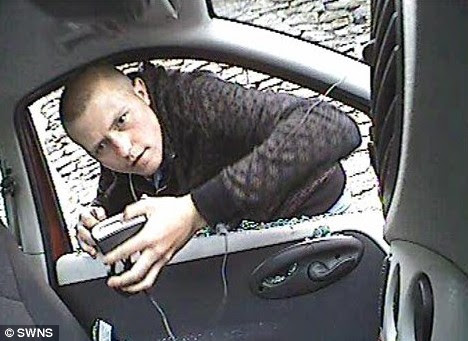 James Milsom, 21, was filmed breaking into the vehicle, just six weeks after he was released from prison for stealing a sat nav from another unmarked police car.

The pictures revealed it took him only six seconds to smash the window and grab the sat nav from the vehicle parked in Cumberland Road and make a quick getaway in broad daylight.

Milsom, from Mangotsfield, Gloucestershire, was released from jail less than six weeks ago.

It was the third time in four months Milsom he had been caught breaking into an undercover vehicle. In February and March 2008, he was caught on camera breaking into cars parked in Queen Charlotte Street car park and Tyndalls Park Road, police said.

He has now been jailed for another 14 weeks.

You know, one would think that this dumbass would learn from his experiences. When he sees a car with all sorts of tempting loot laid out, just waiting to be burgled, surely his previous sentences would make some sort of alarm bell go off in his head? As in, "The cops did this to me before"?

Ah, well. My only objection is the sentence. Instead of 14 weeks, how about 14 years? That'd make the possessions of decent people a lot safer!

He IS a dim bulb!