What a wonderful week for Doofi this has been!

Doofus #32 is from Lebanon, Pennsylvania.

Rescue crews had to cut apart a portable toilet to rescue a man who got stuck naked inside the potty. Authorities say the 31-year-old man used his cell phone to call 911 on Sunday from inside a portable toilet.

Police say the man had been drinking and had taken off his clothes. Somehow, he immersed himself in the holding tank.

Deputy fire commissioner Chris Miller told WPMT-TV, "I've been on the job in one form or fashion for 21 years, and this is the first port-a-potty rescue I've ever had."

Police charged the man with public drunkenness and creating a health code violation, but they have no idea why he was in the toilet with his clothes off. They said he didn't suffer any serious injuries.

Doofus #33 is from Birmingham, Alabama.

A Jefferson County Jail inmate has quite a tale to tell about how he got there. The nude man claimed to be Jesus Christ and George Bush when sheriff's deputies shot him with a stun gun after he ignored their commands.

A motorist spotted the 30-year-old standing nude in the middle of Alabama 79 early Friday morning and called police.

The man struggled with police and was shot with a Taser four times before they subdued him and put him in handcuffs and leg irons.

He told the deputies he was Jesus Christ and George Bush and could break the handcuffs.

Police say he appeared to be intoxicated. The man was charged with disorderly conduct and resisting arrest.

Jesus Christ and George Bush? What a mixture! 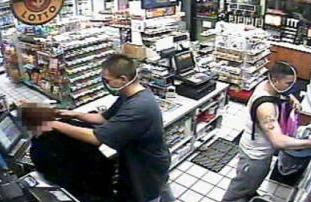 Police say the second thong bandit from an Arvada gas station turned himself in at the Wheat Ridge Police Department late Friday afternoon.

Police say Joaquin Rico, 20, is accused along with Joseph R. Espinoza, 24, with robbing a Diamond Shamrock gas station at Wadsworth Boulevard and West 68th Avenue in May.

Police say Rico was wearing a green thong during the time of the robbery. Espinoza had a blue one covering his face.

Both men are being charged with kidnapping and robbery.

Ah . . . guys . . . if you really had to wear women's underwear over your faces as a disguise, wouldn't it have been better to wear something offering rather more concealment than thongs? How about bloomers, for example? 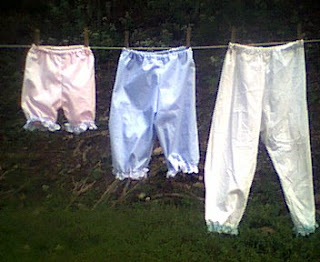