There are two interesting reports for those interested in things toothsome.

First, a patient had two teeth removed under hypnosis, without the use of anesthetic. 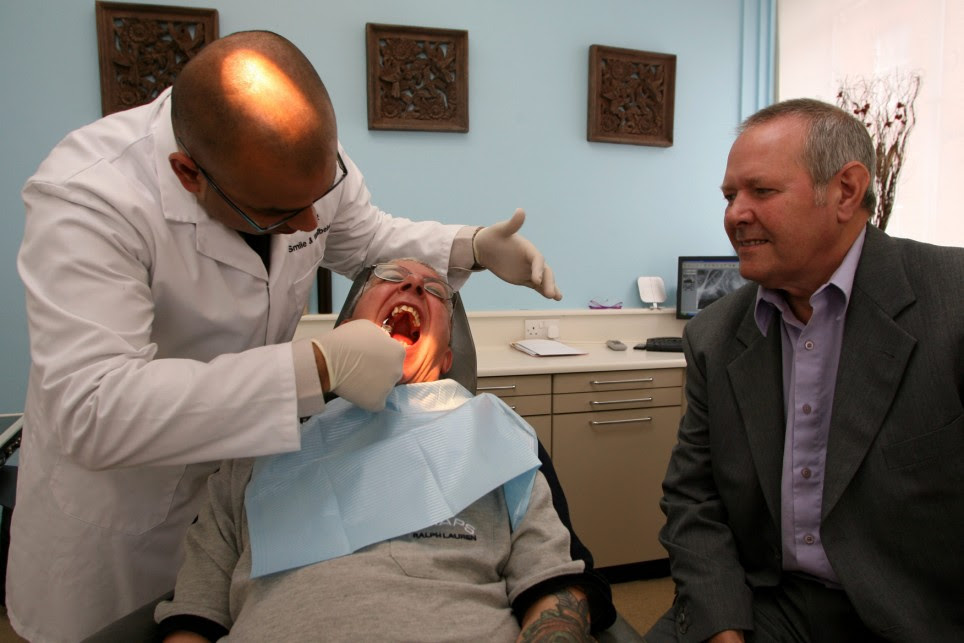 Mr Mason's last visit to a dentist before the recent check-up had been in 1998.

During the operation on May 20 he had two upper right molars removed along with their roots, plus two roots from teeth which had been pulled in the 1980s.

Mr Ridlington spent 45 minutes getting him into a relaxed state of mind beforehand by making him visualise his favourite subject - historic battle reenactments - to distract his mind from the pain.

Mr Mason also had to imagine a dial numbered one to ten, one representing no pain and ten pure agony. Whenever he felt a twinge, he mentally turned the dial back to one.

Mr Ridlington, 59, from Dunmow, Essex, said: 'We all have the ability to control pain with our brains. They control everything about our bodies and our subconscious is the most powerful part - it controls our breathing and the blood pumping through our veins.

'Hypnosis taps into the subconscious mind. It's all about mind over matter.'

The operation was performed by Dr Bhavin Bhatt, who runs the Smile and Wellbeing dental practice in Bishop's Stortford, Hertfordshire.

He said: 'The hypnosis was 100 per cent effective. We're now exploring the possibility of offering tooth transplants under hypnosis.'

The second report states that lasers are now a viable alternative to dentists' drills to remove decay and clean out cavities.

Dentists have been using lasers for years for delicate procedures such as removing small growths from the gum.

However, until recently laser machines haven't been powerful enough to cut through hard tissue such as enamel and bone and also decayed tissue.

Now a new machine developed in Europe means dentists can use lasers in almost every procedure.

And with a laser, many patients don't need an injection of painkilling anaesthetic - the dentist doesn't need to apply pressure on the tooth in the same way as with a drill, which is what causes most of the pain.

Dental lasers don't heat up like the drill - nor do they make the whine of a drill which many people find so off-putting.

Lasers work by exploding each individual molecule they are aimed at - this helps them to cut through and remove bone and enamel.

The new lasers are more efficient because they can accurately focus the high energy light waves that make up the laser beam in such a way that this is absorbed by the tissue or plaque only where required, and does not damage the surrounding tissue or bone.

The first laser on the machine automatically increases power when it is zapping decayed tissue, and slows down when it detects healthy tissue.

The second laser is used for more delicate work on gums and soft tissues, and is similar to those used by beauticians and dermatologists to smooth wrinkles or remove unsightly spider veins. It is able to do this gentler work because it's not beamed at such high-energy levels.

I'm not sure about the hypnosis bit, but I wish dental lasers had been around when I was a kid. I absolutely hated the dentist's drill. This might make tooth repair a lot more tolerable for youngsters, who won't grow up with a phobia about it.

" I absolutely hated the drill"
Amen! My dentist, (about 75 years old in 1965) still used a Rube Goldberg contraption of rubber drive belts on pulleys, from the electric motor through a couple of jointed arms to the drill. It must have spun at least 500 rpm.(current drills spin to 400,000 rpm.)I am sure the thing dated from the 20's or 30's. He was not a believer in Novocaine, either.
Agony.