We've looked at high-resolution imaging sonars in a previous article. They can produce almost photographic-quality images of shipwrecks underwater. (Click the pictures to enlarge them.) 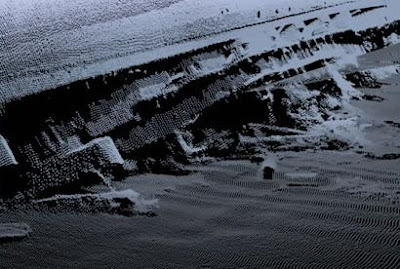 Now it seems that airborne radars are evolving along similar lines. The USAF's Multi-Platform Radar Technology Insertion Program, or MP-RTIP has been under development since 2000. So far about $1.2 billion has been spent on the program, and it's producing some pretty startling results.

Here are three images recently provided by the USAF to Aviation Week. The first, below, shows a picture of a landscape using what is described as the 'Swath SAR' (SAR = Synthetic Aperture Radar) mode of the MP-RTIP sensor. 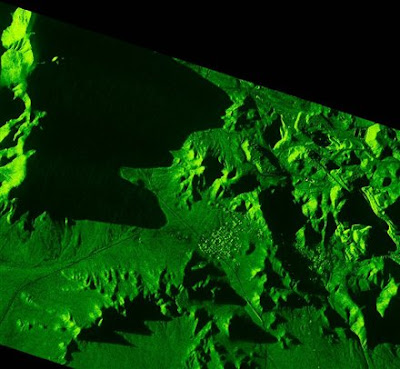 You'll note that there are black shadows across the picture. That's because the radar transmitter is clearly located over to the left side somewhere. The observing station is at a different angle, and can thus capture the image portrayed by the radar, but not see into the 'shadows' cast by obstacles to the radar beams.

The second picture (unfortunately only available in small scale) shows the sensor's GMTI (Ground Moving Target Indicator) mode. The lines and strong colors show where many moving targets - in this case, motor vehicles - have been tracked by the radar. A complete picture of traffic in an area can be built up in this way, and with a high-resolution image of a small area, combining GMTI with the SAR image, it's possible that a given vehicle might be precisely imaged and identified. 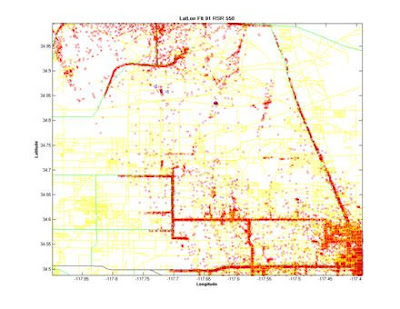 The third picture, below, shows something of this zoom capability. The radar has zoomed in on one particular target and created an almost photographic-quality image of it, using only radar returns. 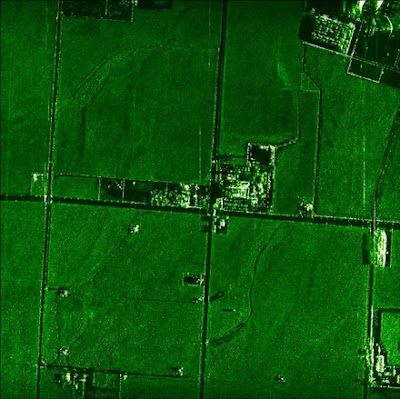 This is pretty spectacular stuff, particularly considering that the program is still in its early stages, and the test installation is only a small sensor. The version now being flight-tested beneath a Scaled Composites Proteus aircraft (shown below) has an antenna measuring only 1.5 feet tall by 5 feet long. 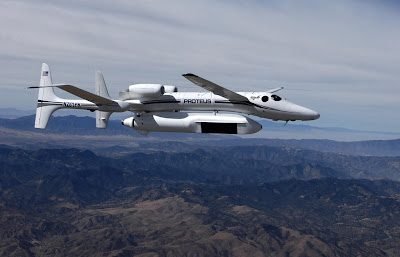 When fully developed, this sensor will be fitted to the RQ-4 Global Hawk surveillance UAV, specifically the RQ-4B Block 40 development, which will be larger, carry 50% more payload, and have enhanced electrical generation capability.

However, budgetary constraints appear to be threatening this aspect of the program - to the ire of many commentators, such as Loren Thompson of the Lexington Institute for one:

What's wrong with this picture? The Air Force plans to spend over a hundred billion dollars to buy 2,000 new fighters, but it can't find the money to upgrade a handful of radar planes with better technology for tracking insurgents. Even though it has already spent a billion dollars to develop the new technology it now says it can't afford to install, even though warfighters in Iraq have identified an urgent operational need for the new capability.

What's wrong with the picture is that the Air Force is in such a budgetary bind over replacement of its decrepit cold war aircraft fleet that it is being forced to make bad choices -- choices that put the lives of soldiers at risk to save modest amounts of money.

Both the target tracks and the pictures of a vehicle can be transmitted instantaneously to forces on the ground. But the Air Force says it only has money to install the new technology on unmanned aircraft, not on the bigger JSTARS. Unfortunately, the quality of target tracks and pictures is proportional to the size of the radar's antenna, so there are many objects that can't be seen by the small antenna on the unmanned aircraft that could be seen by the much bigger antenna on a JSTARS plane.

The original JSTARS radar could reportedly resolve ground objects that were 10-15 feet in size. Even the small MP-RTIP sensor currently being tested has reportedly shown the ability to resolve objects only one foot across. The larger one proposed for the E-10A, and considered for JSTARS retrofit, could probably reduce this by an order of magnitude. What's more, both radars appear to offer very strong jamming capability. By focusing their beams onto, say, a cruise missile's sensors from many miles away, they could theoretically prevent it from locking on to its target. I'll examine this in more detail, along with other directed-energy weapons, in another article soon.

It's fascinating to think of a radar device that can track very small objects from a great distance, using multiple platforms (one to transmit the signal, one to receive the resulting image and either refine it itself, or re-transmit it to operators on the other side of the globe), and which is also capable of detecting enemy missiles (even stealthy ones) and jamming their guidance systems. What's more, it looks as if it may be capable of producing not just a blip on a screen, as current radars do, but a photo-realistic image of a potential target, allowing visual identification by operators a long way away, and permitting real-time targeting decisions to be made.

Hmm. Sonars that can image their targets underwater with photographic accuracy; and now radars that can do the same from great distances. One does wonder what the next generation of military sonars and radars will be capable of doing. Will operators be able to recognize the type of submarine they're picking up on sonar by visual recognition? Will they be able to identify individual vehicles - or even their operators - by a radar signal that's good enough to show number-plates?

We've already seen how present-generation UAV's such as the Predator and Reaper can target terrorists. One hopes that this new technology won't get swallowed up in the Air Force's budgetary boondoggles, and will be developed to its full potential. If I were Abdul Bin Terrorist, in the mountains of Afghanistan, and I read about the capabilities of the next generation of these systems, I'd be getting a little worried, right about now. As for the implications of this technology in a full-scale battle, it'll probably mean a wholesale re-evaluation of what will be effective in combat, and what won't. Nations without access to such technology (or countermeasures against it), fighting an opponent that does . . . it'll be like a Stone Age community versus a World War II armored division in open country. No contest.

I've commented before on the dwindling cost-effectiveness of military aircraft acquisition. I hope the USAF will come to its senses, cancel a few gold-plated fighter aircraft, and invest the money saved in some larger MP-RTIP systems for its JSTARS aircraft. I reckon the return on investment (and the improved safety of our troops) would be significantly better over time.

EDITED TO ADD: Thanks to Lyman L. for forwarding a link to NASA's Imaging Radar Web site. It focuses more on the use of such radar from space, but contains some good definitions and background information. Worth visiting, if the subject interests you.
Posted by Peter at 6/03/2008 09:54:00 PM

Don't forget the Air Force is often told by Congress that it needs those fighters because they are built in the district of some influential Congressman.