Today, June 16th, is the anniversary of the Soweto uprising in South Africa in 1976.

This was an extraordinary day in that country's history. The schoolchildren of Soweto, near Johannesburg, the country's largest city and its commercial hub, rose in rebellion against a requirement of the apartheid government that they learn in Afrikaans, the 'language of the oppressor', as they saw it, as well as in English and their tribal languages. 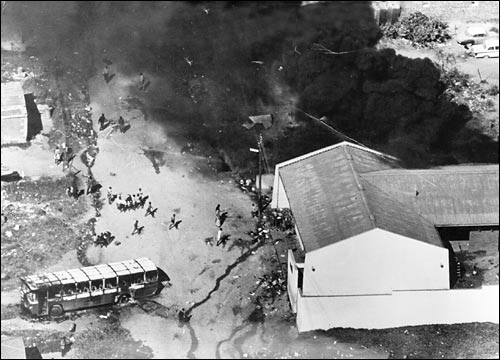 The violence that exploded on that day would continue to roll across the country for eighteen years. Only in 1994 would democracy finally come to South Africa and the system of apartheid - one of the most evil and noxious systems of government in the world - end at last.

The world-famous photograph above shows Mbuyisa Makhubo carrying the body of 12-year-old Hector Pieterson, shot by police on that day. Hector's sister Antoinette runs alongside them.

The Soweto uprising marked the radical polarization of South Africa's Black youth. Until then the older generations had largely remained silent under the oppression of apartheid, protesting at times, but cowed by institutionalized State violence whenever necessary. At last the youth of the country had had enough. They were not prepared to tamely accept what their parents had considered inevitable or unavoidable - and they saw no reason why they should not respond to the institutionalized violence and oppression of the State with violence of their own. 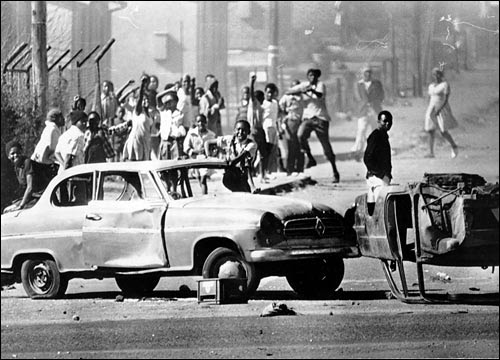 I vividly recall the events of June 16th, 1976. It was a 'wake-up call' for the whole country. The great tragedy is that so much of the (entirely legitimate) Black resistance to apartheid was taken over by Communist-trained leaders, who proceeded to use the same violence against their own communities and people in an attempt to take over leadership of the 'struggle', dispose of rivals, and intimidate the people into supporting their particular brand of 'liberation'.

Tens of thousands of people died between 1976 and 1994. The true total will certainly never be known, as many simply 'disappeared'. They were abducted, tortured for information, and murdered by the authorities; killed during riots; killed in internecine, Black-on-Black violence; murdered by Black political groups trying to remove rivals (most infamously the African National Congress's virtual elimination of the Pan Africanist Congress and the Black Consciousness Movement in the Eastern Cape region); and caught up as innocent bystanders when violence swept through their townships. I've heard figures suggesting that a hundred thousand people died during that period, and I see no reason to disbelieve that total. It may be higher.

Among those who died were twenty-seven of my friends, the vast majority of them Black.

I remain proud to have been part of the effort to help the victims of violence in South Africa, irrespective of their political affiliation or color or religion. Tragically, those groups who tried to stay apolitical, and help anyone and everyone who needed it, were seen as enemies by both sides in the struggle. We paid a heavy price in lives and injuries.

Today I remember my friends . . . and mourn for them. South Africa is the poorer for their loss. They were the bravest and the best people I ever knew.

As humans, we all are diminished when systems like apartheid are allowed to stand. Thank heaven for the men and women with the fortitude and determination to not tolerate this outrage, and may they be eternally blessed for their sacrifices. My condolences for your tremendous losses on this day of remembrance, Peter.

I remember that too. I remember sitting on the family couch and reading in Time about the death of Steve Biko. All very sad.

Just out of curiosity? Are times better now? I've read about a lot of lawless behavior occuring there over the last decade. Mike

Politically, things are not so much better as more democratic. The present government is incompetent, corrupt and nepotistic - but at least everyone has a say in electing it. I guess that's progress, and certainly it's better than the evil system that was there before.

Socially and economically, things are a mess, and will be for some decades yet. I've said all along that it'll take two generations at least to undo the damage caused by apartheid, and so far I've seen nothing to make me want to amend that forecast. Apartheid's been gone for fourteen years now. One and a half generations to go . . .