A reminder that defense is more mindset than tools


I had an interesting discussion with a friend the other day. He had several questions about defensive hardware - firearms, ammunition, perimeter alarm systems, etc. - that were technically valid, but missed the point. I had to remind him that one's personal security is, first and foremost, a matter of mindset. If one is alert to one's surroundings, and determined not to be a passive, acquiescing victim to violence, one is much less likely to find oneself in a difficult situation in the first place; and, if that should happen, one's much more likely to successfully ward off a criminal assault. The tools involved, while important and necessary, are actually secondary to mindset and attitude.

He was a bit dubious about this, and challenged me to illustrate my point with an actual incident. I did so willingly - with several incidents, in fact. This one, however, tickled his fancy, and he asked me to share it on my blog. It dates back to May 1993, when this column was published in the Chicago Tribune. 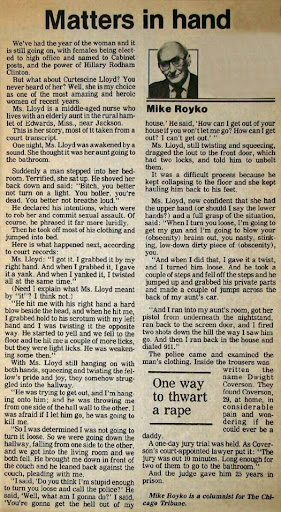 (For those interested in reading the luckless Mr. Coverson's appeal against his sentence, you'll find it here. It didn't work.)

Isn't it nice when bad things happen to bad people?

Mike Royko died about 10-years ago.

He was a clever, astute writer and told it like it was, but with a tinge of humor.

I miss his column.

Pure awesomeness. This will be shared with others.

Sadly, if this occurred today, SHE would be charged with attempted murder for firing her gun at the fleeing would-be rapist.

The story is priceless, but the writing and spelling and grammar are over the top! Can we get that back, please? I, too, miss Mr. Royko's column.

Absolutely hilarious! I hope he spent his time in prison working to get all of those torn tendons to knit back together.