Larry Correia does it again - and in fine style!


My blogging, guns and writing buddy Larry Correia is on the verge of a very busy eight months. His third book, "Hard Magic - Book 1 of the Grimnoir Chronicles", is published this week. 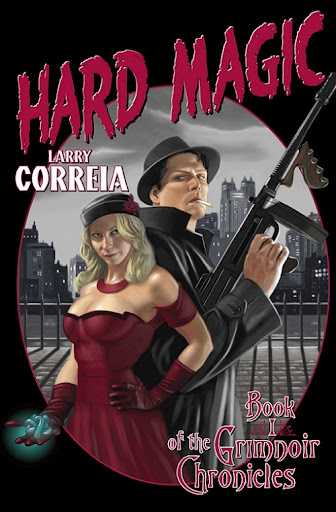 Larry has three more books coming out before the end of 2011. To make matters even more interesting, he's one of five finalists for the Campbell Award for "the best new professional science fiction or fantasy writer of 2009 or 2010". That's some going!

I had the privilege of being one of Larry's advance readers for "Hard Magic". It's very different from his first two in the "Monster Hunter" series. I'm not going to give anything away, but if you like steampunk mixed with magic, with a liberal dash of 1920's Prohibition-style gangsterism thrown in, you're going to love "Hard Magic". I've already ordered one of the limited-edition hardcover copies (signed by the author). If you want one, get your order in fast at that link (i.e. now!), because they're almost gone.

I can't think of anyone who deserves this success more than Larry. He's worked like a slave at running his own business while writing his first manuscripts; faced disappointments from agents and rejection from publishers; "bitten the bullet" and self-published his first book, "Monster Hunter International". Not surprisingly (given the work he put into writing, polishing, publishing and marketing it, the latter with the help of his friends), sales took off like wildfire. This attracted the attention of Baen Books, who (sensible people!) signed him to a multi-book contract. He's an inspiration to me, and to all his friends.

Girlie Bear is already begging to be allowed to read this one!