I was saddened to read in Stars & Stripes that former civilian residents of Wolmi-do Island, near Inchon in South Korea, are trying to obtain compensation for their losses in life and property, caused during the Battle of Inchon in 1950.

... Jeong and 160 others who used to live on Wolmi Island are suing the South Korean government for compensation for property their families lost in the bombing.

Also named in the lawsuit are the city of Incheon, whose boundaries include the island; the United States; and the United Nations, which oversaw the international coalition that fought the North Koreans and Chinese forces.

The lawsuit, filed in Incheon District Court in February, asks that about $2,750 be awarded to each of the 44 households represented in the suit, though some islanders say they might ask for more.

The group’s members, many of whom fled Wolmi in the days before the bombing, say their case is different from those of other South Koreans who were affected by the war because they were never allowed to move back to their village. The small, wooded island - then home to a village of about 600 people - is separated from the mainland by a narrow channel. 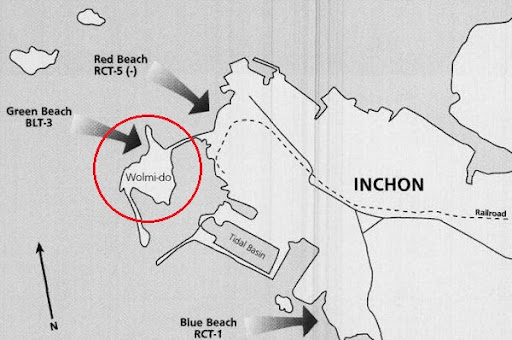 They say the U.S. bulldozed the homes left standing on Wolmi soon after the bombing to make way for a U.S. military base. The island later became a South Korea naval base that was eventually closed and turned into a park.

Many never recovered the bodies of the dead, including Jeong, who believes his father’s body is buried underneath the broad sidewalks and grassy lawns of Wolmi Park.

His father, then a 35-year-old fishing captain, packed up his young family when he heard rumors that the North Koreans were coming, and moved them to a neighboring village off Wolmi. He went back to the island alone several weeks later to pick up food and supplies. There, he was likely captured by North Korean troops and forced to work alongside other islanders building strongholds for the North, Jeong said.

Then came the U.S. bombing.

The next day, Jeong’s mother returned to the island and found her husband’s body buried under rubble, and wrapped it a straw mat before U.S. troops forced her to leave. She was not allowed to return, and the family never learned what happened to his body.

"My father must be buried somewhere here," Jeong said, tears rolling down his cheeks as he looked across the park. "I feel I have not done the right thing as a son, but there is nothing I can do."

There's more at the link. The New York Times also has an interesting in-depth article on the tragedy that overtook the civilians on Wolmi-do.

I can't help but feel sympathy for the plaintiffs; but I also have to acknowledge that military action against the island was unavoidable. As the Free Republic points out:

Koreans have a peaceful and picturesque name for Wolmi-do - Moon Tip Island. The pyramidal hump of land that thrusts 351 feet up from the sea is by far the highest point of land in the Inchon vicinity. Wolmi was the resort area for that sultry, humid seaport. Across its narrow eastern causeway picnickers, swimmers, family parties, and lovers streamed in the summertime.

After South Korea was invaded, Wolmi's complexion changed abruptly. It became "out of bounds" to the local populace, and the once- placid island vibrated with activity. Trenches were dug; pillboxes built; guns were brought in; barbed wire was strung; mine-fields were planted. Along the southern causeway, which stretched 1,000 yards into the channel, barricades of heavy mesh wire were stretched, supplemented with coils of barbed wire, and every seven feet cast-iron land mines were laid. These deadly cylinders each contained a third of a pound of du Pont dynamite. At the end of the causeway, the tiny island of Sowolmi was a nest of harbor defense guns.

In military jargon, Wolmi-do thus "commanded" the sea approaches to Inchon, the harbor, and the beaches. No ship could pass into the port's tidal basin, the inner harbor, or transit Flying Fish channel without coming under fire of the island's guns. Like an unsinkable battleship, it stood flat-footedly in the path of any invasion scheme - formidable, deadly, immovable. To capture Inchon first demanded capture or at least neutralization of Wolmi. The Reds calculated their advantages and the enemy's disadvantages: First, the tides; second, the current; third, the small, winding channel, which would expose them to point-blank enfilade fire; fourth, the water's lack of depth. Obviously, the Reds concluded, only small ships such as destroyers could get up there, and on their arrival they would be forced to anchor because the current would otherwise dash them into the mud. And if they anchored, the destroyers automatically gave up their prime advantages - speed and maneuverability. Such ships would indeed be sitting ducks for Wolmi's guns. Or so thought the Reds.

"Flying Fish channel was well named," commented Capt. Norman W. Sears, who commanded the Advance Attack Group that captured Wolmi-do. "A fish almost had to fly to beat the current, and to check his navigation past the mudbanked islands and curves in the channel. Wolmi-do was the whole key to success or failure of the Inchon operation. Admiral Doyle told me that this mission must be successfully completed at any cost; that failure would seriously jeopardize or even prevent the Inchon landing. He emphasized that we had to capture Wolmi no matter what the losses or difficulties."

As a result, Wolmi-Do was heavily bombarded by ships and aircraft before being invaded. Wikipedia reports:

On September 10, 1950, five days before the Incheon landing, 43 American warplanes flew over Wolmi-do island, dropping 93 napalm canisters to "burn out" its eastern slope in an attempt to clear the way for American troops.

As the landing groups neared, cruisers and destroyers from the United States and Canada shelled the fortified Wolmi-do Island and checked for mines in Flying Fish Channel. The first Canadian forces entered the Korean War when HMCS Cayuga, HMCS Athabaskan and HMCS Sioux bombarded the coast. The Fast Carrier Force flew fighter cover, interdiction, and ground attack missions. Hundreds of Korean civilians were killed in these attacks on the lightly defended port. 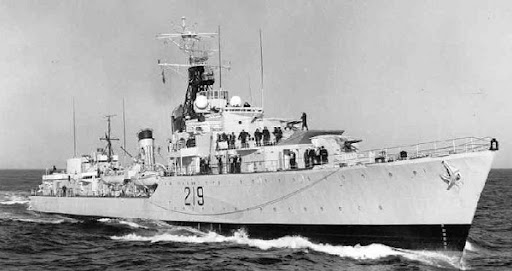 At 07:00 on September 13, Destroyer Squadron Nine, headed by the USS Mansfield, sailed up Eastern Channel and into Incheon Harbor, where it fired upon enemy gun emplacements at Wolmi-do. The attacks tipped off the North Koreans that a landing might be imminent. The North Korean officer at Wolmi-do assured his superiors that he would throw the enemy back into the sea.

The destroyers withdrew and allied cruisers proceeded to bombard the North Korean batteries for the next three hours from the south of the island.

That night Admiral Struble decided on another day of bombardment, and the destroyers moved back up the channel off Wolmi-do. 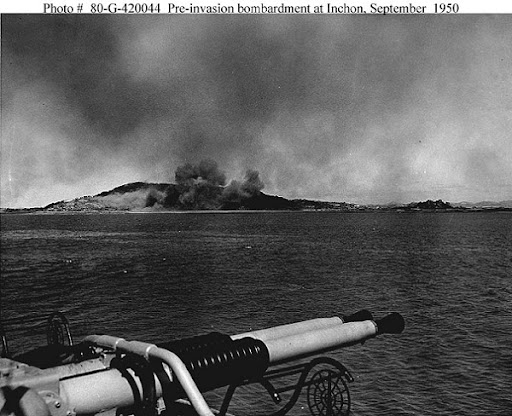 On September 14 the destroyers and cruisers bombarded the island again and planes from the carrier task force bombed and strafed. 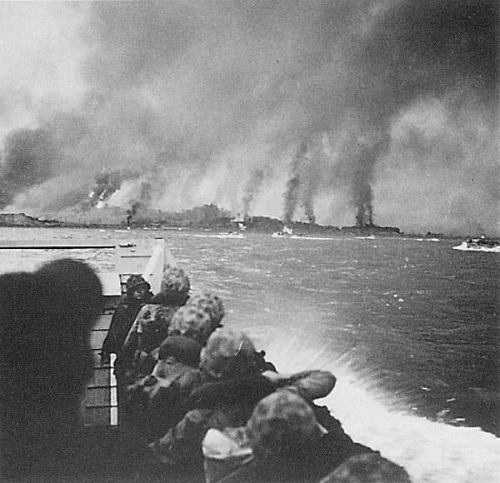 The landing force consisted of the 3rd Battalion 5th Marines and nine M26 Pershing tanks from the 1st Tank Battalion. One tank was equipped with a flamethrower (flame tank) and two others had bulldozer blades. The battle group landed in LSTs designed and built during World War II. The entire island was captured by noon at the cost of just 14 casualties. 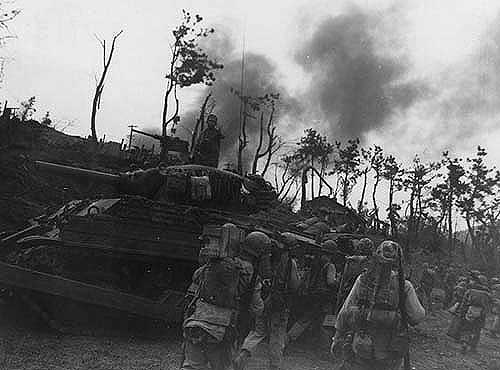 The North Korean forces were outnumbered by more than six to one by the U.N. troops. North Korean casualties included over 200 killed and 136 captured, primarily from the 918th Artillery Regiment and the 226th Independent Marine Regiment. 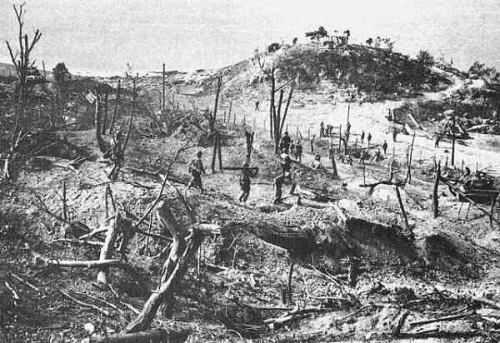 I guess the islanders of Wolmi-do join those of many other islands occupied by larger powers for their own purposes, including the residents of Bikini Atoll, Diego Garcia, and other disputed territories. At least the latter weren't bombed, shelled and burned out of their homes, and didn't have to leave their dead behind! Sadly, all too many islanders in the Pacific had to do just that during the invasions and counter-invasions of the Second World War (as did countless civilians in Europe, Africa and Asia, for that matter); and following the Korean War, the same experience has caused untold suffering in many countries. There's never been a satisfactory answer to the problem of "collateral damage" in war . . . and I doubt there ever will be.

I know it would be a useless endeavor, but shouldn't they be suing the North Korean government? It was their actions that made the landings at Inchon necessary.

Who has the deepest pockets? Welcome to the 21st Century.

I have noticed that on "collateral damage" is regrettable, however it is a fact of life in war. We as a western based power try to minimize the effect. the other combatants don't even bother. I always see lawsuits against the U.S. or its allies, but none against the communist or other SOB that was on the other side. I don't see nobody suing the gargoyle who daddy with the huge support of the Soviets under Stalin attacked a totally unprepared South Korea. They captured Americans early on and executed them after tying them up.
The North committed many atrocities but they get a pass. Gotta sue the south....I guess that is what happens then the rule of law prevails and the North shoots lawyers.