The way the world was


I'm fascinated to learn that a six-volume 16th-century atlas of major European cities has been republished in Germany. 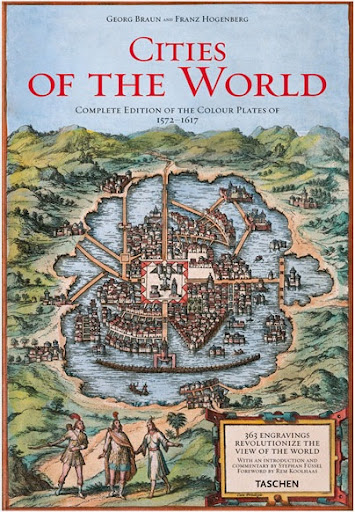 According to the publisher:

More than four centuries after the first volume was originally published in Cologne, Braun and Hogenberg's magnificent collection of town map engravings, Civitates orbis terrarum, has been brought back to life with this reprint taken from a rare and superbly preserved original set of six volumes, belonging to the Historische Museum in Frankfurt. Produced between 1572 and 1617 - just before the extensive devastation wreaked by the Thirty Years' War - the work contains 564 plans, bird's-eye views, and map views of all major cities in Europe, plus important cities in Asia, Africa, and Latin America. Edited and annotated by theologian and publisher Georg Braun, and largely engraved by Franz Hogenberg, the Civitates was intended as a companion volume for Abraham Ortelius's 1570 world atlas, Theatrum orbis terrarum. Over a hundred different artists and cartographers contributed to the sumptuous artwork, which not only shows the towns but also features additional elements, such as figures in local dress, ships, ox-drawn carts, courtroom scenes, and topographical details, that help convey the situation, commercial power, and political importance of the towns they accompany. 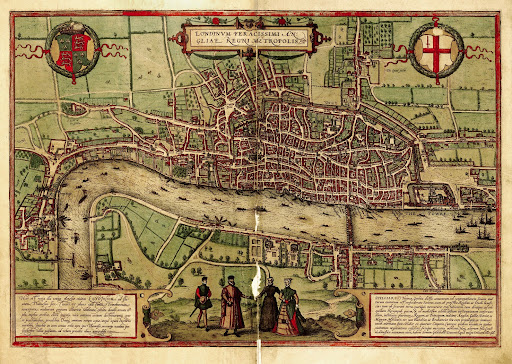 London, England, in the late 16th Century (click the image for a larger view)

The Civitates gives us a comprehensive view of urban life at the turn of the 17th century. TASCHEN's reprint includes all of the city plates, accompanied by selected extracts from Braun's texts on the history and contemporary significance of each urban center as well as translations of the Latin cartouches. A detailed commentary places each city map in its cartographical and cultural context, and examines earlier sources and later editions. Rounding off this comprehensive publication is a separate introductory essay examining the Civitates in its cultural and historical context. From Paris and London to Cairo and Jerusalem, readers will find many a familiar city to zoom back in time to and explore - in fact, many of the maps can still be used for orientation in historical town centers today.

Oh, my . . . this is like catnip to a bibliophile and history buff like me! I can't afford the book, and couldn't cost-justify it even if I had the money, but it's wonderful to see publishers still willing to invest in projects like this, that bring history to life.

For those interested in seeing more (and larger) images from Civitates, the color plates are available online. Scroll down the page to select the city you wish to view from a list. (The image of London, above, was taken from this link.)

I recently stumbled upon a 130-year-old atlas of the U.S. amid donations to the library book sale. Those old, battered books never sell, so it was headed for the recycling bin. It's mine now!!!

It's not art, but is sure is fascinating!

Ooh--Peter, I'm a cartophile too. Truly a Renaissance project. I too will have to content myself with the online version.

I'll bet Eric Flint will be buying one...