Having just posted about a gun I was selling, it was ironic to come across the Web site of Chocolate Weapons this afternoon. 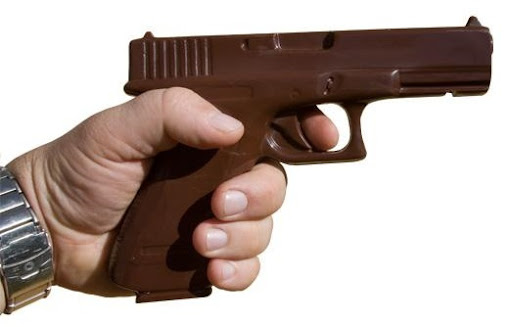 They describe their origins as follows:

... several years ago we started a company called which manufactured and sold high end chocolate fountains to caterers, hotels, casinos, reception centers and other high end event centers. In addition to selling the chocolate fountains we also sold chocolate ... and literally TONS and TONS of it. With our connection in the chocolate industry we had virtually a limitless supply of chocolate, and just as many chocolatiers and chocolate factories who could basically make anything and everything we ever wanted to. 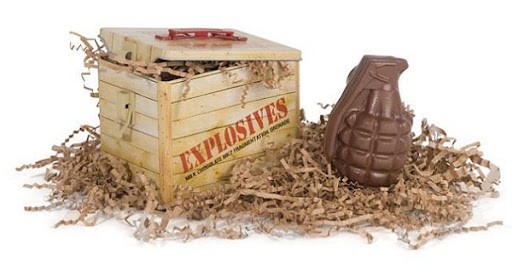 While I was growing up we spent a lot of time in the mountains fishing, camping, and hunting. On a recent getaway vaction/hunting trip, we were all piled in the car ... dirty, grimy - hadn't bathed in days - and we were discussing our existing business, and ways we could help it grow. Someone blurted out, "We should make chocolate bullets!" 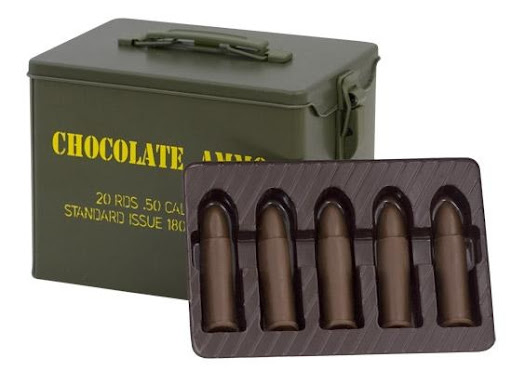 We all had a good laugh for a few minutes while we imagined ourselves selling Chocolate Ammo to our current customers, which consisted of high end hotels and caterers and even brides. "Yeah right...seriously, Chocolate Bullets?!? No way!" 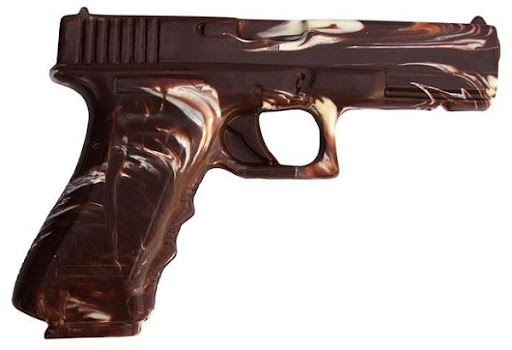 And then it struck us ... why not? Why shouldn't we? Granted, our caterers and brides probably wouldn't be thrilled about buying Chocolate Bullets, but as we started thinking about it we thought of more and more people who would buy the chocolate bullets and would get a kick out of them. I mean shoot ...we thought it was a good idea - why wouldn't others? We thought the Chocolate Ammo would be great stocking stuffers for outdoorsman, hunters, and people who love guns and love to shoot. So we decided to go for it. We contacted one of our chocolate factories and asked if they could make chocolate shaped bullets ... after a good laugh (and after they realized we were serious ...) they said that although they'd never made anything like this before they would love to give it a try. 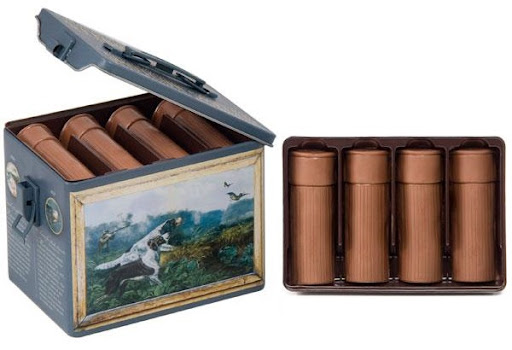 So off we went, we designed the chocolate bullets, and decided that a great way to package them would be in little, mini ammo cans, with "Chocolate Ammo" stenciled on the side, similar to a real ammo can. After we designed the whole package, chocolate bullets and mini ammo can ... we showed the idea to some of our colleagues, who also love to shoot - they LOVED IT! And with that, we decided to go full throttle with the idea ... and the Chocolate Bullets and Chocolate Ammo were born. Since then, we have expanded our Chocolate Ammo range of products to Chocolate Bullets, Chocolate Guns, Chocolate Grenades, and more! It all came from one little idea that was mostly a joke to start with.

That's the first time I've actually felt hungry while looking at a gun! I'm thinking these might sell a whole lot faster than the real thing at the next gun show . . . We're heading up to a farm with Oleg next weekend, to shoot a bunch of Civil War-era blackpowder muzzle-loading cannon. I wonder if Chocolate Weapons would be willing to produce a chocolate replica of a Napoleon 12-pounder?

wv 'gouthe' - what you get from too much sugar?

They'll probably make them illegal in California and Massachusetts.

.. Are you sure that Glock ain't the real thing? How can you tell? :p