I wasn't familiar with the Finnish "cello rock" band Apocalyptica until an anonymous reader sent me the link to one of their video clips today. 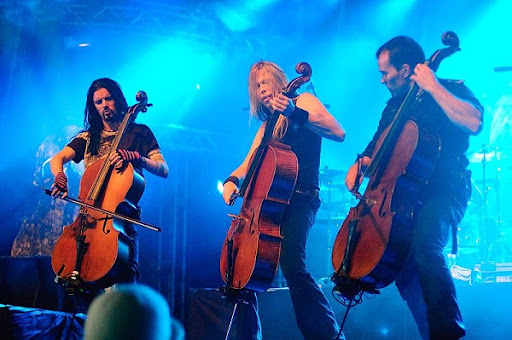 The band is composed of classically trained cellists Eicca Toppinen, Paavo Lötjönen, and Perttu Kivilaakso (all three of whom are graduates of the Sibelius Academy in Helsinki) and drummer Mikko Sirén. Originally a Metallica tribute band, their music borrows elements from many genres including classical music, neo-classical metal, post-grunge, progressive metal, thrash metal, and symphonic metal. They have sold over four million albums to date.

Here's the video clip to which I was directed. Apocalyptica perform an instrumental version of the Metallica hit "Nothing Else Matters".

I have liked these guys for a couple years now. Just weird, though. Hall of the Mountain King is great.

That IS different, no question! :-)

Finland seems to produce more than their fair share of talented musicians. Must be all that time spent indoors in winter :-).

Like Tom, I have been listening to these guys for years, and they are different, and very good. Definitely worth the listen.

Thanks.....Good stuff, but when I showed it to my 18 yo...He informed me he was already listening to them...go figure...

Ever listen to Nuspirit Helsinki ?

Did you see these guys?