I'm currently reading John Trotti's memoir "Phantom Over Vietnam" (which I highly recommend: it's out of print, but used copies are freely available). In it, he recounts a couple of wonderful stories about US Navy and Marine Corps flight training, which I thought I'd share with you.

The first is from the days (during and after World War II) when the SNJ (a naval variant of the North American T-6 Texan) was the primary flight training aircraft. 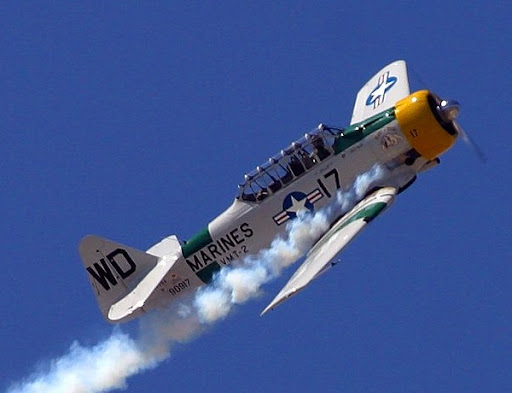 There is a legend floating around from the days of the mighty North American SNJ trainer about the instructor who loved to detach his control stick in the rear cockpit (a normal procedure for cross-country flights to ensure against its becoming hung up during flight), and after rapping the student on the head with it for added emphasis, would toss the stick overboard to signify that it was up to the student to take them home and land. One day, a student sneaked a spare control pole aboard so that when the instructor did his thing, the student mimed puzzlement before nodding his head in understanding. After several more moments of apparent indecision he proceeded to fumble around for a bit, before brandishing the spare stick aloft and sending it to join its cousin.

A more advanced stage of Naval flight training used (during the 1960's) the Grumman TF-9J Cougar, a twin-seat advanced training version of a 1950's jet fighter. 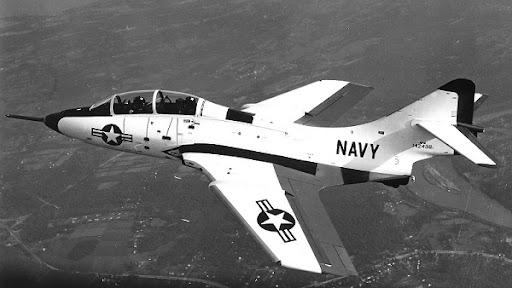 There is an "old-timer" tale in the training command about a Navy lieutenant junior grade with a penchant for becoming highly agitated in the air, often venting his frustrations over the radio. Students were terrified to fly with him, and his fellow instructors were getting so tired of the streams of vituperation that poured forth over the headsets day after day that finally a group decided to take matters into their own hands. When it came time to embark on a four-plane formation flight, instructors rather than students manned the cockpits.

As the airplanes taxied away from the flight line, instructors, students, and all the off-duty squadron personnel in the area crowded around the ready-room base radio to listen in on the fun. They hadn't long to wait. Immediately after takeoff, the flight switched onto its assigned tactical frequency in preparation for the initial flight rendezvous, but instead of making orderly, stabilized approaches towards the instructor's plane, they took turns making kamikaze runs from all directions and in all attitudes. The airwaves were alive with graphic epithets.

And finally after ten minutes of screaming came pleading and swearing: "Go home, you miserable bastards, go home! You've all got downs! I'll get you all washed out of the program unless . . . ohhhhh sheeeit, HERE THEY COME AGAIN!"

The instructor came roaring into the ready room, eyes ablaze, set to skin a bunch of students alive, only to be greeted with the loud guffaws that accompanied the first of hundreds of replays of the tape. Realizing that he'd been had, our erstwhile hero fled from the ready room in full retreat.

There was a kind gent that used to be a military pilot and cartoonist, Bob Stevens. His work appeared in the Air Force Magazine. I got a collection of them years ago. He drew both of those stories.

If you like aviation, his work is definitely worth acquiring. Pure gold!!!!

The latter story can also be found in Admiral Daniel V. Gallery's comic novel Stand By-y-y to Start Engines!, with Blue Angels taking the place of flight instructors in tormenting the hapless instructor.

When I was in jet transition training, our "screamer" was Lt. John McCain. Yes, that John McCain. He would criticize, scream, and even throw his kneeboard at the hapless helmet in front of him. Quite the educational experience. A couple of years later, I almost felt sorry for the NVA who took him prisoner!

I remember reading Phantom over Vietnam a number of years ago. It was the first jet combat book I ever read that talked about all the management and calculations a pilot had to do in his head while carrying out his mission - especially fuel management.

Good book, and Bob is right, that was in one of Gallery's books; but also based on 'reality'. Well worth the read and shows a different side of military from one who was there in the seat.

Ha! I was going to say "that sounds like something out of a Dan Gallery book!"

My Dad had all those Gallery books. I wish they were still in print (the copies I inherited from him were printed on the absolute worst acid pulp stock possible, they've all basically disintegrated) because there were any number of "oh crap I'm going to pee my pants because I cannot stop laughing at this" moments.

The biggest one that sticks in my mind was the scene where Curly and the gang fly inverted and get the Admiral in the PBY to try to roll it over while the pilot is in the head. This was a more catastrophic laughing fit than others mostly because I was in a library at the time. Something about knowing you have to be quiet, in the midst of a full on laugh attack that makes it even funnier. The librarian came over to ask me if I was ok, if I was having some sort of seizure, at which point, I completely lost it, and had to run out so as not to disturb the other patrons.

Adm Windy Day, Lt Cmdr Curly Cue, "Cap'n" Fatso... Yeah, I had a lot of fun reading about those guys.

Peter, I recently received my copy of Phantom Over Vietnam, ordered 4/13 from Biblio.com based solely on this post. Looking forward to reading it! :)