I'm sure many readers are familiar with the equestrian sport of show jumping. 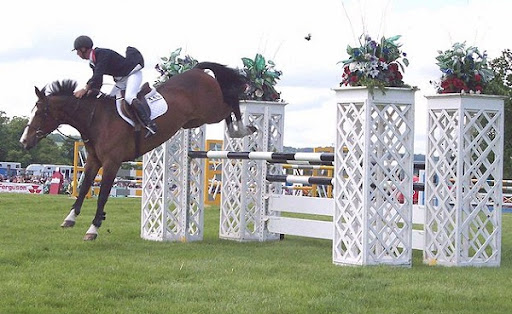 It seems a different version of the sport has become increasingly popular in Europe. The Daily Mail reports:

That rabbits like to hop is hardly a secret. But now European rabbit enthusiasts have harnessed their bunnies' natural talents to create a new spectator sport... rabbit showjumping. 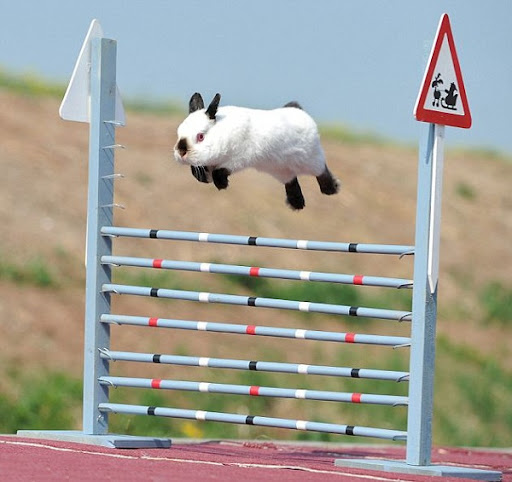 Invented in Sweden in the early Eighties, Kaninhop involves bunnies bouncing their way around courses consisting of several small jumps of varying height and length.

Over the past few decades to sport has spread far from its Scandinavian homeland and clubs have now sprung up in several other European countries, the U.S., Canada and even Japan.

Rules vary from country to country, but generally the more jumps a rabbit clears the higher its score. There is also sometimes a time element to competitions.

As well as the dressage-style courses, there are also long-jump and high-jump challenges. The world height record is 99.5cm while the best distance is fully three metres, according to Swedish fan site kaninhoppning.se.

Animal rights activists are alarmed by the past-time. Sweetrabbits, a private animal rights initiative in Germany, has criticised the use of leashes in Kaninhop competitions.

The group has even accused trainers of using the tethers to pull uncooperative rabbits over the obstacles.

But Miss Fehlen points out important practical reasons for keeping competing rabbits leashed: 'We use them in tournaments for safety,' she said.

'Just think of what would happen if a male were to break free. We want to avoid uncontrolled reproduction. It has happened before.'

There's more at the link, including more (irresistibly cute!) photographs. I must confess, I had to laugh at the thought of using leashes to prevent uncontrolled coney copulation!

Here's a video clip of the bouncing bunnies doing their thing.

I wonder what happens to those that can't make it in competition? Rabbit stew?

I think only stewing will soften all those overworked muscles, making dinner edible. What a great story. Thanks!