Superglue to mend a broken heart?


I'm amazed to read of a novel use for superglue in cancer treatment. The Daily Mail reports:

When doctors discovered a rare tumour in Jamie Arliss’s heart they thought there was nothing that could be done to save her.

There is no-one alive in the world with such a tumour - and they thought the mother of one was doomed.

But then cardiologist Christopher Cave came up with a radical idea to save her.

He filled the golf-ball sized tumour in her heart with superglue - which amazingly has stopped the tumour growing and saved her life. 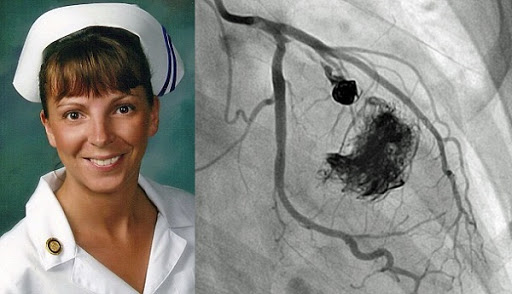 Jamie Arliss and an X-ray of her heart, showing the superglued tumor in black

It is the only case of its kind ever performed in the world - and now her case is being recorded in medical journals around the world.

Dr Cave, from the University of Rochester Medical Centre, USA, where the world-first operation took place, said: "There are no patients in the world alive with this type of tumour.

"Surgeons had operated to try and remove the tumour but it was impossible so there was nothing that could be done to save her."

Then in a stroke of luck, a neurosurgeon came to work in Dr Cave’s office, as his own office was having work done to it. And Mr Cave observed some work he was doing using a medical form of superglue to mend blood vessels in the brain.

He said: "I saw the superglue and wondered if it would be possible to put it into the tumour and stop it growing.

"I spoke with the neurosurgeon who was hesitant as it had never been done before, but we decided that it would be worth a try."

Dr Cave said: "We had previously tried to cut off the blood supply to the tumour, but it had found another blood supply source and had carried on growing.

"It was desperation, but this mass of glue has really worked. It has stopped it growing and now it is completely inert. Normally in a brain operation half a tube of this glue is used, but we used four tubes."

Mrs Arliss has now made a complete recovery and is expected to live a normal life.

Thank Heavens Dr. Cave was a man who could "think outside the box" and recognize possibilities in something completely unrelated to his own field. I wonder whether this treatment might work on cancerous tumors in other parts of the body as well? If superglue can stop them growing, too, this might offer new hope for all sorts of otherwise-untreatable conditions.

Surely some bureaucratic drone will notice.

Superglue, in its various forms, has some pretty cool uses. Even the regular stuff can be used to help seal small skin lacerations that don't require stitches but are too awkward for a bandaid. I fixed my four-year-old's stuffed tiger with superglue after her older sister pulled one of the eyes out. From my recollection, superglue of some kind was used on the toe pads of search-and-rescue dogs to protect them from damage in the high heat and sharp debris as they worked the destruction of Ground Zero on 9/11 and the days following. It's cool stuff.