Former Vice-President Al Gore titled his best-selling documentary (and accompanying book) on climate change "An Inconvenient Truth". It seems the United Nations Environment Program has just discovered that the truth can, indeed, be highly inconvenient.

In 2005, the United Nations Environment Programme predicted that climate change would create 50 million climate refugees by 2010. These people, it was said, would flee a range of disasters including sea level rise, increases in the numbers and severity of hurricanes, and disruption to food production.

The UNEP even provided a handy map. The map shows us the places most at risk including the very sensitive low lying islands of the Pacific and Caribbean.

It so happens that just a few of these islands and other places most at risk have since had censuses, so it should be possible for us now to get some idea of the devastating impact climate change is having on their populations.

... a very cursory look at the first available evidence seems to show that the places identified by the UNEP as most at risk of having climate refugees are not only not losing people, they are actually among the fastest growing regions in the world.

Mr. Atkins' report received widespread distribution: but instead of responding honestly, UNEP tried to cover up its earlier forecast by deleting the relevant information from its Web site. Mr. Atkins wrote on April 16th:

The United Nations Environment Programme has tried to erase one of its glaring failed predictions about climate refugees by removing a a map from its website purporting to show where 50 million climate refugees will come from by 2010.

After Asian Correspondent reviewed its findings earlier this week, the story has been linked to by websites around the world such as Investor News, American Spectator and was referred to in yesterday’s Australian newspaper and even got a mention on Fox News.

However, the website which is maintained by GRID-Arendal, an official United Nations Environment Programme (UNEP) collaborating centre, has now deleted the map.

Is the deletion of this map without adequate explanation an example of Mr Steiner’s transparency and accountability? I will be emailing him to seek a response.

Thanks to Google Cache and other archives of Internet postings, the map in question may still be seen. Here it is (click it for a much larger view). 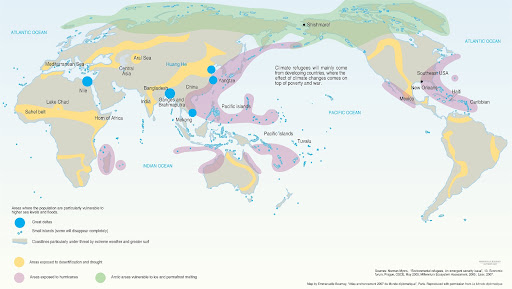 In a third article, published today, Mr. Atkins may have put his finger on the real root of the matter.

The ShadowLands’ story about the United Nations’ failed prediction that there would be 50 million climate refugees by 2010 has gone global, and the United Nations Environment Programme’s subsequent attempt to hide the evidence only made it much, much worse.

German magazine der Spiegel has published a thoughtful article on the subject, with the first response from the UNEP as follows:

But now the UN is distancing itself from the forecast: "It is not a UNEP prediction," a UNEP spokesman told SPIEGEL ONLINE. The forecast has since been removed from UNEP’s website.

So let’s get this straight. UNEP provided a map to the media, but the information UNEP provided did not come from UNEP. This is odd, because the cartographer we were asked to credit (and I did credit at the foot of the original post), Emmanuelle Bournay is described here as the UNEP cartographer.

In any case, are we supposed to be happy that the UNEP provided information to the media that is presumably false? And if the map is wrong, in what way is it wrong? And why was it removed after Asian Correspondent linked to it, but not when pro-global warming lobbyists like this or this linked to it?

But why, I hear you ask, did the United Nations exaggerate the situation in the first place? Maybe you can find a clue here:

Yep. For an explanation, "follow the money". Create panic, sow alarm and despondency, and use the resulting brouhaha to raise money from worried donors so you can 'fix' the problem you've just got them worried about!

Why am I not surprised?

I'm a bit surprised actually... that these ever so progressive types at the UN don't understand that not only can you not remove something from the internet by deleting your copy, but that attempting to do so makes you look like a complete jackass with something to hide to anyone who was on the fence in the argument at hand.

Hey - I'm in one of the areas (Florida - hurricane zone) where people should be leaving in droves.