Today's award goes to the idiot(s) in the US Army who came up with the idea of beautifying a building in an awesomely tacky way.

The Army, under public and congressional attack for a $600,000 plan to dress up a bus depot at a new military facility near Washington with three pieces of art, such as a 10 foot-tall fairy riding a gurgling toad, has scrapped the project. Instead, it will go with a simple plan to "enhance the aesthetics" of a concrete wall at the new Mark Center in Alexandria, Va. 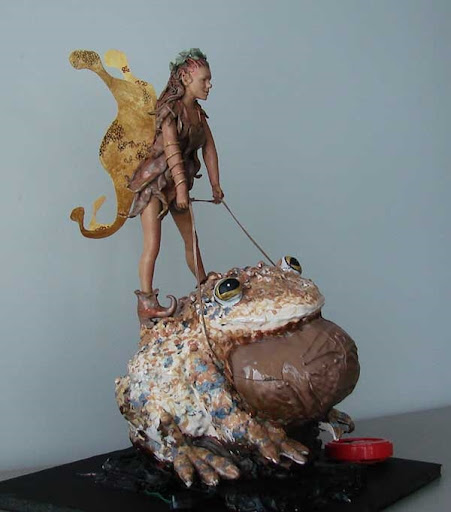 Stunned by the expense, noted government watch dog Sen. Chuck Grassley opened an investigation. Initially an Army official, responding for the U.S. Army Corps of Engineers, which heads the $1 billion Mark Center construction effort, defended the $600,000 project, saying it was worth just "0.1 percent of the cost" of the new facility.

But in a second response this week, the Army junked the idea and said it would no longer be purchasing a sculpture like the toad or any of the other three proposals under consideration.

Each of the four art proposals for the bus terminal included two wall murals and a sculpture. The Army budgeted $200,000 each for the murals and sculpture, for a total of $600,000. The one drawing most attention was the fairy and toad from artist Cheryl Foster. Her proposal describes the sculpture this way: "A 10-foot fairy, using an American Toad as 'transportation', scurries to the entrance of the station. The interior of the toad is illuminated and the sounds of nature emanate from his throat." She said that nature inspired her.

As a military and combat veteran, I can imagine only too clearly what our servicemen and -women would have to say about a sculpture of a fairy riding a frog (!!!). I somehow don't think their remarks would fit the definition of "politically correct" . . . do you, dear readers?

I agree with your assessment, Peter. The whole project has been one giant fustercluck, from the name "Fort Belvoir North" to the siting (just 100 meters from I-395) to the access (no direct access to the Interstate--only indirect over local roads/avenues; no METRO station, etc.) We anticipate several years of congestion for not only FBN workers, but for commuters in the whole Northern Virginia area, including the world's largest office building four miles North. So $600,000 for ugly, irrelevant "art" comes as no surprise.

And just this morning we learn that the building plans have been compromised and somebody has posted on the Internet an estimate of the amount of TNT needed to bring it down.

Wow. A fairy riding a frog...which looks to have a giant ballgag in its mouth, to boot.

Tell me again why ending "Don't Ask, Don't Tell" was such a good idea...

Maybe they should go for an amorous Monkey and a football.

I know in the context of the entire US Army 600k isn't a lot of money, but it sure is when there are thousands of things it could be spent on to better effect.

That frog thing is hideous, too.