This is one of them.

Of all the gardens in all the world, the thief had the bad luck to break into the one where Cromwell was peacefully gnawing on his bone.

The three-year-old English mastiff is a gentle pet. But his breed are also born guard dogs - and big ones at that.

Only the thief and Cromwell know exactly what happened next.

But it can't have been friendly, as the dog's owner heard a 'scream, a roar and a commotion' from the back garden. 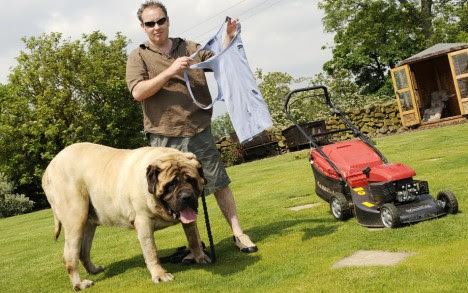 George Watson, 43, had been having a bath and ran outside in his towel, to see the thief zooming off down the driveway in his van.

Apart from a very agitated dog, the only evidence the man left behind was the torn Tshirt.

Mr Watson, who lives with his wife Lesley, 43, and daughter Molly, ten, in Gordon, Berwickshire, assumes Cromwell tore the shirt from the thief's back to stop him stealing the family's lawnmower, which had been taken from the shed and left by the gate.

At just under 22 stone the dog could be the world's heaviest - so it is lucky that this is all he tore off.

'By the time Cromwell had finished with it it was covered in holes,' his owner said.

Mr Watson, a regional manager of an IT company, does not expect the man to return for another go.

I hope the would-be-thief took care to wear the brown trousers that day.

Good Puppy! He nearly had another bone to chew on....

Tip and Ben TOGETHER don't weigh that much!
I hope Cromwell got a big, fat marrow bone to replace "the one that got away"

NICE doggie! I'd say get him a steak, but he might rather have a whole cow.....

And how dumb IS that thief?!? I mean, broad daylight, a dog that big, and the fool STILL tried to steal something?!?

...and count this as two days in a row I'm enjoying the idea of you giggling madly.

I'd drop a significant amount of hard-earned dollar to have a video of that transaction.