This is how your Government lies to you


I've said many times on this blog that you can't trust official US government figures for the rate of inflation, unemployment, etc., because they're deliberately inaccurate - designed to look as favorable as possible, for the benefit of those in power, but in reality disguising a steadily worsening situation. However, there are always those who don't believe me, who insist that the government wouldn't do such a thing because people would lose faith in them if they found out. (Some of us found out a long time ago, and we certainly did lose faith; but then, we're the thinking minority among a herd of non-thinking, emotional sheep, aren't we?)

Anyway, the latest unemployment figures, released last week, are a perfect opportunity to illustrate such lies in action, and debunk them thoroughly. Let's start with the numbers as provided. Time magazine reports:

Just when we were expecting the economy to go boom it went zoom.

The unemployment rate in November dropped faster than it has in more than 11 years. You have to go back to September 2000 to get a quicker decline. What's more, the jobless percentage, which fell to 8.6% in November from 9.0% a month before, was the lowest it's been in two and a half years. This alone is good news but it's even more amazing considering where we came from. Just four months ago, the obstacles for the economy seemed to be piling up. The debt stand-off in Washington was ugly. The U.S.'s credit got downgraded. Consumer confidence plunged. The Labor Department reported that employers added zero, nada, new jobs in August. And then came the growing debt problems in Europe. A double dip recession seemed inevitable. Apparently it wasn't. "Clearly, the growth of the recovery has stronger underpinnings than we thought," says Gary Burtless, a labor market economist at left leaning think tank Brookings Institute. "All of these shocks were not enough to knock us down."

... to me, the number suggests that the economy could be picking up ... That's not just good news for the unemployed, but for the long-term health of the economy in general.

First, Zero Hedge points out that new applications for unemployment benefits - in other words, the number of newly unemployed persons - have been understated almost every time over the past year.

And going back to the BS from the BLS, as John Lohman's chart below shows that in 2011 initial and continuing claims have been revised higher the week following 91% and 100% of the time, respectively.

A purely statistical explanation for this phenomenon is "impossible."

Again, more at the link. Bold print is my emphasis. As the author says, it is statistically impossible that such adjustments, almost always in the same direction, should occur over so long a period by random chance. Inescapably, we must conclude that the figures initially released (always attracting the most publicity and attention) are almost always purposely skewed to present the most favorable picture possible. Later, when the powers that be hope that people have stopped paying attention, the figures are revised to portray a more accurate picture. So much for trusting Big Brother, eh?

Next, John Mauldin goes into detail about what the economy actually needs in terms of job creation, compared to what it's producing. (Link is to an Adobe Acrobat document in .PDF format.)

Employment Up But Not Enough

The headline number is that 120,000 new jobs were created in November, in line with estimates. That total is the sum of 140,000 jobs from the private sector coupled with the now usual loss of 20,000 jobs in the government sector. But when we look at the details, things are not as upbeat.

120,000 jobs is not quite enough to keep up with the growth in the population. Along with positive revisions to previous months, we have now averaged about 114,000 a month for the last 6 months. But then why did the headline unemployment number fall to 8.6%? That is a very large drop for one month. The simple answer is that the number of people looking for a job fell by 315,000. And the number of people counted as not in the labor force (a different measure) swelled by 487,000 to a record 86.5 million.

Again, for new readers, you are not counted as unemployed if you have not looked for a job in the last four weeks. Let’s look at a chart from the St. Louis Fed database that shows the number of citizens not in the labor force. What we see is a rise from 77 million in 2007 to 86.5 million today. Part of that can be explained by population growth, but it would be less than half of the increase of almost 10 million people not considered to be in the labor force. 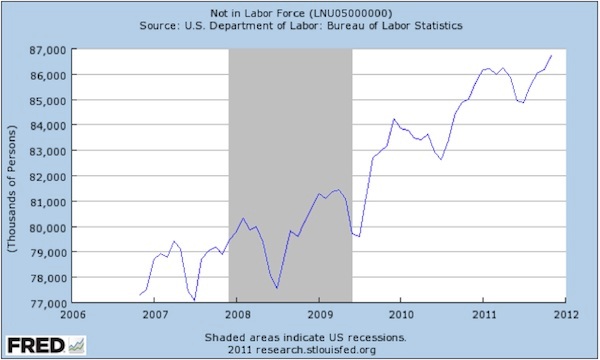 If we looked at a chart of those counted as being in the labor force, we would see that it is roughly where it was back in 2007, yet there has been working-age population growth of at least (my guess) 5 million. And the next chart shows the number of people that are actually employed, private or government, full- or part-time. What we see is that the number of people working is about where it was 8 years ago. 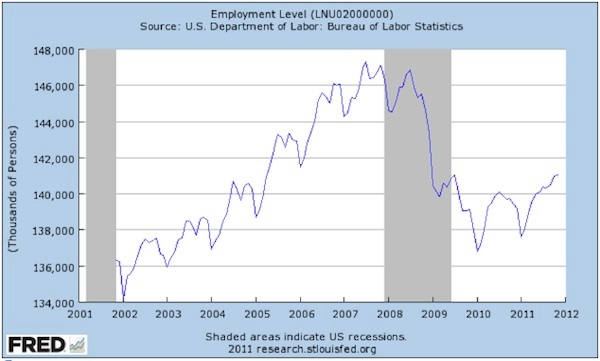 That is not a pretty chart. What all that means is that unemployment would be closer to 11-12% if we went back to the labor force of just a few years ago and adjusted for population.

Let me quickly note, too, that if we went back to the unemployment measurement basis of a few decades ago, the numbers would be closer to what I suggest above. Counting unemployment the way it is currently done allows whoever is in charge to publish numbers that look better than they are in reality on the street. I expect Republicans to point this out in the next election cycle, although if they get into office they will have to live with that analysis when it comes back to haunt them in four years. Because as the next chart shows (from my friend Lance Roberts of Streettalk Advisors in Houston), we need job growth of about 400,000 jobs a month to get back to the long-term trend by 2020. This shows the employment-to-population ratio, which has dropped by 6% since 2000, falling precipitously since the beginning of the recession. We have never had such strong employment growth, and are unlikely to get it as we reduce government spending, which we must do. 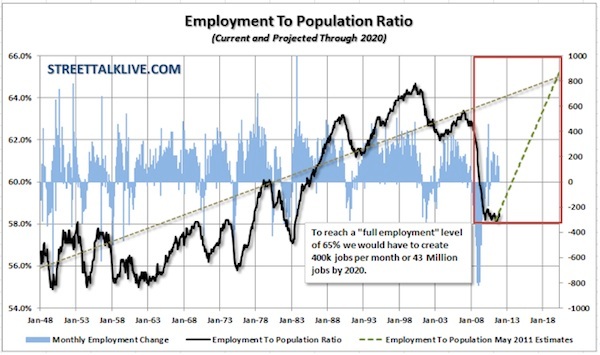 This shows above all else why the #1 issue for the coming elections will be jobs. The US economy is looking more and more European all the time in terms of unemployment numbers. If the course is not changed, it will make any real recovery back to what we think of as “normal” for the US highly problematic.

Finally, the “quality” of the new jobs is not what we would like. More and more people are taking lower-paying jobs. We saw 105,000 jobs in retail, temporary, and food services out of the total of 120,000. Many of these are seasonal and will fall off in the next quarter.

Again, more at the link; and again, bold print (in the last paragraph) is my emphasis. John Mauldin is a very astute analyst, and he's right on the money here. (If you don't already subscribe to his free newsletter, I recommend it to you.)

The facts of our (un)employment situation, as laid out by Mr. Mauldin, certainly make that glowing report in Time magazine look more than a little over-done, don't they? The 120,000 'new' positions filled last month mostly turn out to be distinctly short-term, made up overwhelmingly of seasonal jobs that'll be gone by January. They aren't a factor of importance when assessing the long-term US employment situation.

This is an example of a well-known phenomenon. If you give people only some of the facts, but not all of them, they can't make a properly informed judgement about what you've just told them. In the case of government statistics, our politicians and bureaucrats don't want us, the electorate, to know what they're doing with our Republic; so they don't release all the information we need to assess their performance. It's therefore become necessary for the average citizen to dig much deeper than the numbers they provide, in order to interpret them correctly. That's what I try to do for my readers in articles such as this one.

Finally, let's examine the labor and employment figures provided by John Williams of Shadow Government Statistics, commonly known as Shadowstats. (We've encountered him in these pages several times before.) Mr. Williams knows full well that our government is, at best, being 'economical with the truth' when it comes to statistics. In all too many cases it's modified the method of calculating them, so as to leave out important elements that were once used, but became too embarrassing. You can read here how the government has modified the calculation of employment and unemployment figures. Here's an excerpt.

The Clinton administration also reduced monthly household sampling from 60,000 to about 50,000, eliminating significant surveying in the inner cities. Despite claims of corrective statistical adjustments, reported unemployment among people of color declined sharply, and the piggybacked poverty survey showed a remarkable reversal in decades of worsening poverty trends.

There's more at the link. Basically, for the past couple of decades, the figures have been deliberately falsified through 'creative calculation'.

Mr. Williams calculates an 'Alternate Unemployment Rate', using the methods in operation prior to the politically-inspired meddling of the past few decades. Needless to say, it paints a far more disturbing picture than the artificially adjusted 'official' numbers. Here's how he sees our current unemployment situation, courtesy of Shadowstats.com . 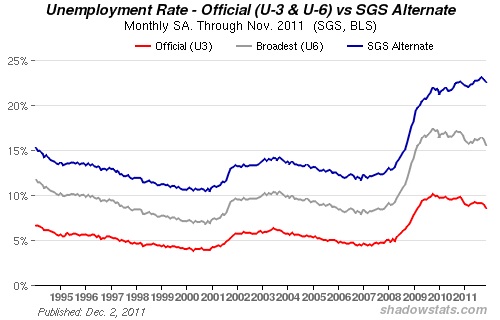 The line labeled 'SGS Alternate Unemployment Rate' is calculated according to the methods and factors used up to the early 1990's, leaving out all of the 'politically correct' adjustments since then. As far as I'm concerned, it's a much more accurate measurement of unemployment than the BLS figures mentioned in the Time article cited above. It shows our real unemployment rate to be about 23% - almost three times higher than the oft-quoted 'official' rate of 8.6%!

There you have it. I've provided the 'official' government statistics on (un)employment, and shown how they're so skewed and deliberately flawed that they might as well be an outright lie. We could apply the same exercise to the 'official' rate of inflation, or the 'official' money supply, or any other 'official' statistic that our leaders issue. They're almost always guaranteed to be less than accurate . . . and that's being far too polite about them. Furthermore, this criticism applies equally to Democratic and Republican administrations. Both parties play the same dishonest game with the electorate.

We're being systematically hoodwinked by our own government. Please remember that in 2012, and vote for individuals (not political parties - honest, upright individual Representatives and Senators, irrespective of their party) who will work to undo that and repair the damage, as far as they possibly can. I don't care if they're Tea Party or Occupy Wall Street in their persuasion - we need them both! If we don't stop the rot now, it may be too late to do so next time.

You mean to tell me that the Government lied to us, oh my!!!

Unfortunately I can't agree with the last statement. There may be a few of the OWS crowd that believes in limited Government, but so far I haven't seen them.

I really don't count myself in the armed insurrection crowd, but we've got to stuff the genie back in the bottle or plan on loosing all our freedoms. I will agree that that means voting for whom ever will fight that fight with us, regardless of party.