Today's award goes to the person or persons in the United States Air Force who decided to release this publicity photograph of a F-22 Raptor fighter during the recent Exercise Red Flag.

Unfortunately, they neglected to check what was in the background . . . which just happens to be the USAF's infamous and top-secret Area 51!  The runway can be clearly seen above and behind the F-22's cockpit canopy. 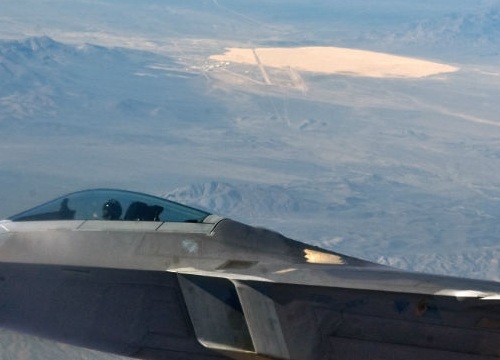 The USAF has moved swiftly to erase the picture from where it first appeared, but thanks to eagle-eyed aviation enthusiasts, it's long since made its escape into the wider Web.  Given that it was at very high resolution (much higher than I've reproduced here), a lot of information about Area 51 might be gleaned from it by a trained observer.

I wonder whether there'll be any security (or career) consequences for those who perpetrated this doofidity?

With this administration, I doubt that it was an accident.

It's long been my opinion that Area 51 is a big fat red herring.

They have everybody concentrating on this So-Top-Secret-We-Won't-Even-Admit-To-It area, while the actual alien spacecraft and JFK assassination records are really stored in an underground facility accessible through the old abandoned Esso station off Highway 50.

Not that I would know that, of course...um, BRB. I could swear I hear a helicopter overhead.

What is the big deal? Enter "Groom Lake, NV" in Google Earth.

big yawn... and agree with da 'fool'... great view from google earth with much better resolution.

oh heck, save ya some time:

hopefull will bring it up...