So much for fiscal sequestration


In the latest Daily Dispatch newsletter from Casey Research, we find this telling graphic of Federal government expenditure over the past 100 years.  Note the highlighted portion for 2013. 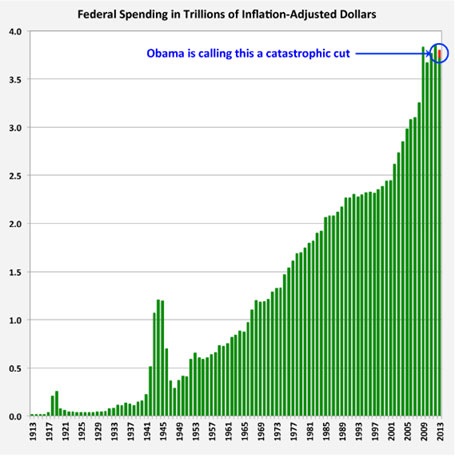 The chart here is of federal spending in trillions of inflation-adjusted dollars. That means that the increase in spending shown accurately reflects the growth in government in real terms (as opposed to reflecting the decline in purchasing power from the currency debasement).

It also shows the scale of the purportedly draconian cuts in federal spending to be made as part of proposed austerity measures… revealing all the hand waving about the severe consequences of said cuts as just so much public information… or, if you prefer, misinformation.

What you can also observe from this chart is that the federal government has grown into a behemoth, a huge prop under the economy… the world's largest economy, for the record. The idea that the politicians will find the backbone to cut this level of spending back to the point where it balances the budget is ludicrous. Even if enough of them wanted to make such cuts, the ensuing depression would trigger a public backlash that would see them voted out of power in the proverbial blink of an eye.

Which is to say that the current trend of currency debasement is almost certainly going to continue until it simply can't anymore.

I've said it before, and I'll say it again . . . we're facing an economic tsunami, caused by that same 'currency debasement'.  The chart above illustrates a big part of the reason for it - and the politicians who put us into this mess aren't about to get us out of it, for the reasons described above.