Gun-banners can kiss my fundamental jujube!  I went to the gun store today to pick up no less than three firearms, ordered from suppliers all over the country, which had made their way here courtesy of UPS, FedEx and possibly others.

First up was a very sweet Howa heavy-barrel .308 bolt-action rifle, which I'll be reviewing here at some length in due course.  (Even before shooting it, I'm already highly impressed with Howa's new two-stage trigger, as is everyone who's tried it so far.)  The rifle came as part of a kit, including a very nifty 4x-16x telescopic sight with illuminated mil-dot reticle and scope rings, plus a magazine conversion unit.  (I might add that the price of the kit, known as the 'Targetmaster package', is substantially less than buying its components individually.  It's not like I have unlimited funds, so I took full advantage of the importer's Howa package offers.  They're a great deal, especially for a high-quality, higher-priced rifle like a Howa.  Go to Legacy Sports' Web site, mouse over the Howa link, and select any of the entries ending in the word 'package' for more information.)

Next up was a Browning Buck Mark pistol, about which I asked for your assistance a couple of weeks ago.  A reader helped me locate a Contour 5.5 URX model, of which I've just taken delivery.  (It made sense to get all the firearms together, then pay for a single background check before taking possession, rather than pay for three separate background checks as each one came in to my local dealer.)

Finally, readers may remember that back in January, I'd given one of my prized Smith & Wesson Model 65's to a friend in need, and was looking for a S&W Model 686 or a Ruger GP100 to replace it.  I found a great deal at my local gunshop.  They'd just obtained one example of the hard-to-find 5" barrel version of the GP100, which isn't in Ruger's standard catalog at all - it's made exclusively for Davidson's.  Here's what it looks like. 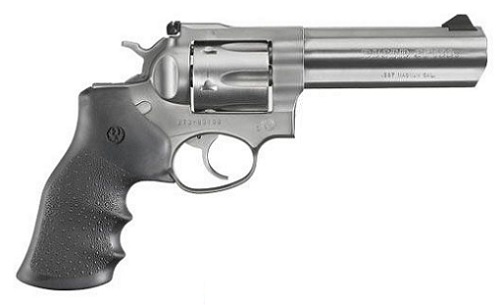 I tried it, and was instantly hooked.  The 5" barrel seems to give the perfect balance in my hand, compared to the standard 6" (which is a bit muzzle-heavy) or 4" (which is a bit butt-heavy - you should pardon the expression!).  The price was reasonable, too, by today's standards (and considerably lower than Davidson's list price), so I sighed and took the plunge.

(BTW, if any of my readers are interested, my dealer has another of those 5" barrel GP100's in stock.  E-mail me if you'd like contact information - the address is in my blog profile.)

I'm looking forward to shooting all three guns over the next week or two.  Expect after-action reports here, plus a detailed review of the Howa .308 (over which a number of people are already drooling).  Oleg's taking pictures of them all, and will doubtless put some up on his blog in due course.

Labels: Boys and their toys, Firearms, Me me me, Warm Fuzzy Happy Stuff
Email ThisBlogThis!Share to TwitterShare to FacebookShare to Pinterest

The 6" GP100 with no lug is another way to avoid the front heavy GP.

Warm fuzzy happies for you are well-deserved! Congratulations!

Good choice on the Howa, the action of which is a copy of an earlier sako action.

You will probably find you get point of impact shifts when using the bipod as the hougue stocks arn't stiff enough. Small job to fix. See http://www.ballisticstudies.com/shop/MatchGrade+Bedding+Products/MatchGrade+Synthetic+Stock+Stabilizer+Kit.html

If you find the magazine gets knocked out becouse the mag catch is on the front of the well I have seen two solutions used. Shorten the mag catch or put a wide rubber band around the mag at the point just under the mag well.

Getting the personal armory squared away before the trying times ahead?