I'm conducting some pretty extensive research into strategic bombing before and during World War II, in preparation for a prospective series of Weekend Wings articles.  As part of that research, I've been reading several older books on the aircraft designed for strategic bombing, and how they were employed.  Steve Birdsall's 1973 book 'Log Of The Liberators' (long out of print, but still available from used book dealers) is one of them. 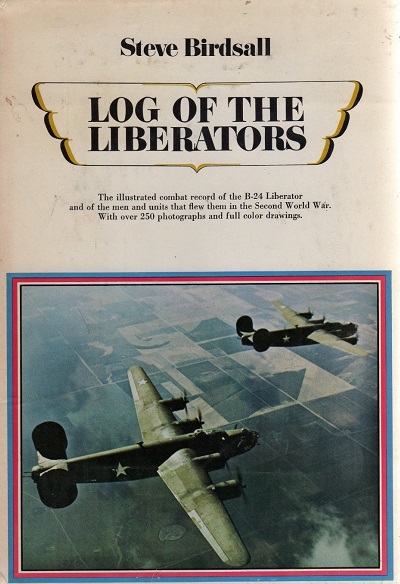 He quotes part of a 1943 poem titled 'The Unsung Hero's Lament', although he admits he hadn't been able to trace the full work.  I was intrigued by the part he quoted, and did an Internet search to see what I could find.  The most authentic source appears to be this one from the Web site of the World War II-era 464th Bombardment Group.  The author is listed as 'Lt. L.W.Coquillette, Class 43-4-J'.

They sat in state, the heros in the vaulted Halls of Fame,
In proud and scornful silence, for each had made his name,
On fields of storied battle, on many a bloody sea,
Though forged in fire, or carved in mire, each deed in history.

There was little Davy Crockett, and the martyr Nathan Hale,
And the rebel line that fell in Shenandoah's bloody vale,
There was Grant, who knew brief glory, but died another way,
And others known to Time alone, but each had had his day.

There was on each haunted visage, a deep forbidding gloom,
And every gaze upon a stranger who had shambled in the room.
In his left hand was a check list, in his right an R.B.I.,
His face was worn, his clothes were torn, his flight cap was awry.

The first to speak was Caesar, by virtue of his age,
And the finger that he pointed was trembling with his rage.
"What right have ye brash youngster, with these gallant men of yore?"
And the man replied, though not with pride, "I flew a B-24."

B-24 Liberator (image courtesy of Wikipedia)

"It was out on the plains of Kansas, in the land that God forgot,
Where the winter winds are piercing, and the summer suns are hot.
We were young and brave and hopeful, fresh from ten days leave,
Though somehow we knew and the feeling grew, that they were really our last reprieves,

For there's a sort of maniac madness in the supercharger's whine,
As you hear the ice-cubes tinkling in the turbo balance line.
And the runway strips are narrow, but the snowbanks they are wide;
While the crash trucks say, in a mournful way, that you're on your final ride.

The nose gear rocks and tumbles, for it's held with baling wire,
And the wings are filled with thermite to make a hotter fire.
The camouflage is peeling off, it lends an added luster,
While the pitot head is filled with lead to help the load adjuster.

The bomb bay doors are rusted and they close with a ghastly shriek,
And the plexiglas is smeared with some forgotten oil leak.
The oleo struts are twisted, the wheels are not quite round,
And the bulkheads thin (Ford builds with tin), admit the slightest sound.

You taxi out on the runway, 'mid the groans of the tortured gear,
And you feel the check-rider's practiced teeth, gnawing your tender rear.
The co-pilot dozing on the right, in a liquor laden coma,
Mingles his breath, like the kiss of death, with the putt-putt's foul aroma.

So it's off in the overcast yonder, though number one is missing,
And the hydraulic fluid escaping, sets up a gentle hissing.
The compass dial is spinning in a way that broods no stopping,
And row by row, the fuses blow with an intermittent popping.

It was named "LIBERATOR" by a low and twisted mind,
But men who come to Liberal, no freedom ever find.
There is no hope, no sunny ray, to dry their tears of sorrow,
For those who land and still can stand, fly the damn things tomorrow."

The stranger's voice was silent, a tear shone in his eye,
And from all his honored audience arose a vasty sigh.
Great Caesar rose up to him with pity on his face,
And bowing low, he turned to show the stranger to his place.


The poem, of course, stands in the grand tradition of military poetry, both complaining and boastful (I've been known to declaim similar sentiments myself, during my military service [and perhaps afterwards, too, now and again . . . ] )  Does anyone know what the acronym 'R.B.I.' means, in the third verse above?  If so, please let us know in Comments.

There's another version of this poem, with a lot more verses that appear to be later additions.  Given the authorship date above of 1943, that makes sense, because the events to which the additional verses refer took place in 1944 and 1945, when the 464th Bombardment Group was serving in Italy.  They have a very different 'feel' to them than those quoted above, almost certainly because they weren't written by the original author.  The alternate version was published in the 13th edition (Fall 1986) of the 'Toretta Flyer', the newsletter of the 461st and 484th Bomb Groups Association.  It appears on Page 13, if you'd like to read it (the link is to an Adobe Acrobat document in .PDF format), but I won't reproduce it here due to the uncertainty over the additional verses' authenticity.

I'd be interested to hear of similar poetry and/or heroic declamations emanating from World War II bombing and bombardment squadrons, groups and wings.  If any reader knows of one or more of them, and can provide its text plus details of its origin (preferably with links to its source), I'd be very interested to receive them.

It's hard to see a B-24 and not be reminded of Louie Zamperini's dramtic story "Unbroken" by Laura Hillenbrand. Of how dangerous the B-24 was even in training missions. Of his B-24 with 594 holes in it's skin from Japanese fighters and flak. And most of all, what a deathtrap it was for any crew unlucky enought to have to ditch at sea. The Flying Coffin earned its name.

R.B.I. may refer to Reply by Indorsement, often a reprimand that required a reply acknowledging receipt.