What a waste of wheels!


I was astonished to see this photograph at Zero Hedge this morning. 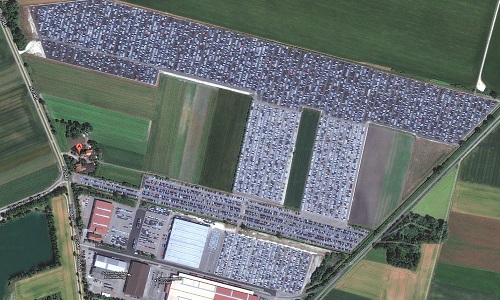 According to Zero Hedge, those are hundreds - no, thousands! - of late-model cars that have just come off short-term leases in Germany.  Instead of being sold into the used car market, they're gathered at this site prior to being dismantled and scrapped, so as not to overshadow the very tight market for new vehicles.  (You can see a full-size version of the image here.)  The fact that many consumers would welcome the chance to buy clean, late-model used cars is irrelevant, it seems.

Unfortunately, even despite such measures, new cars aren't selling very well.  Reuters reports that European new car sales declined by 8½% year-on-year in January, with Ford sales dropping no less than 26%.  The USA isn't much better - for example, General Motors has almost doubled the inventory of unsold motor vehicles held by its dealers since 2007.  It's a practice known as 'channel-stuffing', where the company can report good shipments of vehicles from its factories, even though those vehicles aren't actually being sold to consumers.

I guess the automotive industry is as unethical, in its own way, as are the banksters . . .

This is a storage facility for new and returned leasing/company cars from Audi, since they have not enough capacities at the manufacturing plants in the city of Ingolstadt, which is about 5 miles north. Scherm, a logistics operation owns the place. They are the schipping contractor for Audi. The cars are shipped to the dealers from there, they are not scheduled for destruction.

It's not surprising that the sale of new cars has been falling. The average price of a new car is around $30,000 which is quickly approaching the median household income. Also, taking into account incomes have remained flat and prices for necessities are rising it isn't hard to figure out why people aren't buying cars. It doesn't help that cars are built better now and lasting longer.