Last month I wrote about shelves for storing emergency supplies, etc.  At the time, I mentioned that due to particle board's propensity to lose strength and structural integrity when wet, I planned to replace some particle board shelves with ¾" or 1" plywood.  I've since done so, and they're working well.

However, I learned something else.  My ammunition supplies are stored on shelves similar to those shown below, a Gorilla Rack unit measuring 72" tall by 36" wide by 14" deep.  They've been erected inside a standard steel office cupboard, which I keep locked (for obvious reasons). 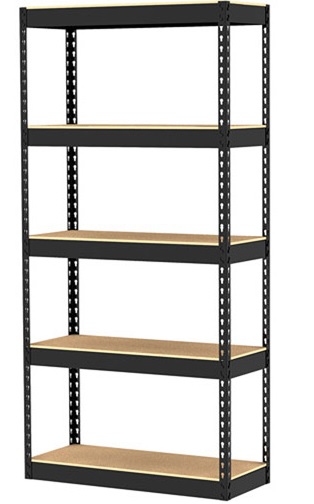 I wasn't overloading each shelf beyond its rated weight limit, but as the load approached that limit, the particle board shelves were sagging in the center, leading to the support struts at front, back and sides being pulled inward at the top and pushed outward at the bottom.  The boxes and bins on each shelf were also sagging away from the vertical as the shelf beneath them bent under the load.

I replaced those shelves as well, using ¾" plywood (I bought the cheapest grade - the shelves are hidden from sight in their cupboard, so appearance isn't important).  It's made a huge difference to the soundness of the structure.  The support struts no longer sag inward or outward, and even at full rated load, the shelves are level and carry the weight with no trouble.  Furthermore, although I hadn't noticed it before, the cupboard now sits more level on the floor.  I think the formerly sagging support struts were placing stress on the uprights, which was distorting the cupboard as a whole.

So, my enthusiastic recommendation for any heavily-loaded, sagging particle board shelf is that you replace the particle board with plywood that's at least ¾" thick.  Suppliers such as Lowes or Home Depot will usually cut a sheet of plywood to size for you if you buy it from them, either free or at very reasonable cost.  I simply took in one of my existing shelves, and the nice people at Lowes measured it and cut five plywood shelves to the same dimensions.  It couldn't have been easier, and my new shelves are a lot stronger and more stable.

One of the thinks you can do to increase the strength of the plywood shelves tremendously is to route a couple of 1/4" by 1/4" slots in the bottom and then bed allthread in a thickened epoxy in the slot. The shelves will be much more rigid.

It sounds like you don't need it now, but it's a neat and easy trick.

tGaPO --
The "gorilla Rack" shelves have steel support rails that extend some distance below the shelf, so there is no particular need to go to the trouble of routing a channel for allthread in this case. Any rib stiffener glued and screwed to the bottom side of the shelf would improve the strength of the shelf without cutting into available space below it.
But at this point I think the increased stiffness gained by moving from particleboard to plywood makes the stiffness of the wood shelf not the limiting factor in the overall load capacity of the assembly.