Putting our government debt in context


An article at Investors Business Daily puts it in perspective.

If you want a sense of just how massive the nation's debt problem is, consider this: The U.S. added $226 billion in new debt in just the 35 days since President Obama missed the legal deadline to submit his budget.

That's more than the government will spend this year on education, homeland security, law enforcement, housing aid, energy and the environment, combined.

A 1921 law requires the president to submit his budget plan to Congress on the first Monday in February, but Obama so far hasn't produced one, and the White House says it won't release its plan to get the nation's deficits and debt under control until sometime in April.

Senate Democrats, meanwhile, haven't produced an annual budget — also required by law — since 2009. Over that time, the nation's debt has climbed $5.5 trillion, according to the Treasury Department.

Obama has ... said he will consider only modest changes to Medicare and Medicaid, and wants hands off Social Security. Leading congressional Democrats have vowed to fight any significant changes to entitlements.

But the CBO also makes clear that these programs must be addressed: "Unless the laws governing those programs are changed," it noted, "debt will rise sharply relative to GDP after 2023."


There's more at the link.  Essential reading if you want to be fully informed about the economic catastrophe that looms over us.

The tragedy is, neither Republicans nor Democrats are serious about dealing with this situation.  They parrot glibly on about "reducing spending", when in fact all they're doing is reducing the rate of increase in spending.  Neither party is willing to actually cut the USA's coat according to its cloth - namely, spend only what can be funded by tax revenues.

Karl Denninger, writing at The Market Ticker, charts and projects the growth in major entitlement spending programs and interest on central government debt as follows: 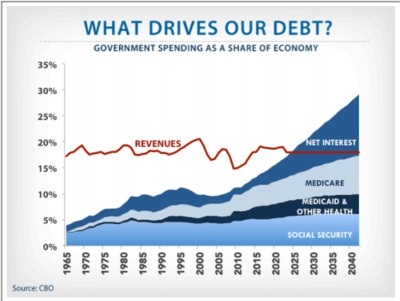 Within approximately two years Medicare, Medicaid, Social Security and interest payments will consume all tax receipts.  At some point before that happens the markets are nearly-certain to deduce that we are not serious about attending to the budgetary imbalance as we're then borrowing to pay the light bill in the Capitol, say much less anything important like Defense.

When, not if, that recognition occurs there is literally nothing that The Fed or the Government will be able to do about the ensuing flight from assets in this country, as the only remaining step available to the government to fund this escalation of spending will be outright confiscation of some form.

As I have no indication at present that anyone on The Hill will even discuss the fundamental arithmetic that lays behind this irrefutable truth, say much less reduce it to legislative language and introduce it as a bill despite several years of attempting to do so, I am forced to recommend that you prepare for the worst.


Again, more at the link.  Bold, italic and underlined print are his emphasis.

There is no possibility whatsoever that we can avoid fiscal and economic disaster unless and until our politicians face up to reality and legislate accordingly.  If you think they'll suddenly start to do so, I submit you're not living in the real world.  I predict their next step will be to try to take over private retirement plans such as IRA's and 401k's, applying our trillions of dollars in savings to pay down the national debt in exchange for a 'guaranteed' state-provided pension.  Whether that pension will be as good as what you'd saved for yourself, or whether it will be as reliable, is, of course, entirely in the realm of conjecture . . .  Follow the links provided above, and make up your own mind about whether or not this is a likely development.  I believe it is.

Frankly, I'm wondering whether the current brouhaha over gun control measures (which I certainly oppose) is nothing more than a ploy to get us worked up and distracted over Second Amendment issues, whilst all the time, in the background, the politicians figure out more ways and means to spend us into penury.

One of the last and most distinct actions of a gov't on the verge of collapse (for any reason) is to loot the treasury.