One of the weirder incidents of World War II


I'm doing research for a forthcoming series of Weekend Wings articles on strategic bombing.  In the process, I've been reading a lot of books that are long out of print, neglected by many modern scholars, but containing much valuable material.  One of them is 'Flying Fortress' by Edward Jablonski, published in 1965.  In its pages, I found this story, that I thought might interest my readers as well.  I've included links to the unusual place names and other subjects.

On November 23, 1944, spotters of a British antiaircraft unit near Cortonburg, Belgium, were astonished to see a B-17, its landing gear down, approaching their gun positions.  As the gunners put in a call to their Operations Room at nearby Erps-Querps, the Fortress came in fast for a rather rough landing on a plowed field near the gun position. 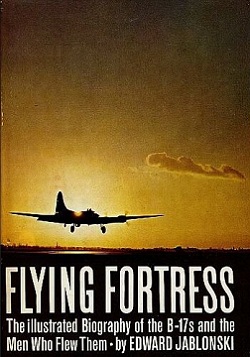 It bounced to within thirty yards of the gun crew and came to a sudden stop when one wingtip dipped and dug into the ground.  The propeller buckled and the engine stopped but the other three remained in operation.

John V. Crisp arrived upon the scene about twenty minutes after he had been notified of the plane's approach.  The three propellers continued revolving, but no one had emerged from the B-17.

Crisp finally discovered the front entrance underneath the fuselage and was able to get inside the plane.  He found no one aboard, "although evidence of fairly recent occupation was everywhere".

He managed also after some experimentation to turn off the four engines and then proceed to inspect what came to be called "The Phantom Fortress".

"I next looked at the navigator's table," Crisp has written.  "The aircraft log was open and the last words, written some time before, were 'Bad flak'.

"We now made a thorough search and our most remarkable find in the fuselage was about a dozen parachutes neatly wrapped and ready for clipping on.  This made the whereabouts of the crew even more mysterious.  The Sperry bomb-sight remained in the Perspex nose, quite undamaged, with its cover neatly folded beside it.  Back on the navigator's desk was the code book giving the colours and letters of the day for identification purposes.  Various fur-lined flying jackets lay in the fuselage together with a few bars of chocolate, partly consumed in some cases."

George J. Hansen, then serving with Advanced Headquarters, 8th Air Force Service Command in Brussels, sent a crew out to investigate the mysterious aircraft.  On checking the plane's serial number, he learned that it had come from the 91st Bombardment Group and that the crew was already safe in England.

What had happened was that the plane, on a mission to Merseburg oil targets, developed trouble just before reaching the target area.  The plane was not able to bomb with the rest of its group and, in addition, was plagued with a malfunction of the bomb racks.  Then a direct hit knocked out No. 3 engine and another filled the center of the plane with a tremendous flash.  "We had been hit in the bomb bay," pilot Harold R. DeBolt reported later, "and I'll be damned if I know why the bombs didn't explode."

With one propeller windmilling and the weather closing in, DeBolt headed for England and then changed his mind, for the plane was obviously not going to make it back to East Anglia.  He then pointed the B-17 towards Brussels and ordered all loose equipment jettisoned to lighten the load.  It was then that two engines quit.  Setting the B-17 on automatic pilot, DeBolt ordered the crew to bail out, leaving the plane last.

All landed safely - and so did their stricken B-17.  What had undoubtedly happened was that after the crew jumped, with justification as far as they could discern, the trouble in the engines cleared up and the beautifully designed, stable, B-17 flew itself.  Its malfunctioning engines, however, would not keep it up and it simply came down as described by John V. Crisp.  To his uneducated eye the plane appeared to be undamaged and what he thought were the crew's parachutes were probably extra parachute packs.

Throughout the war there were other reports of B-17s which continued to fly though pilotless, but the Phantom Fortress was the only one that succeeded in landing itself more or less intact.


One of those cases where truth is almost as strange as fiction!  You can read more about the incident here.  (The link is to an Adobe Acrobat document in .PDF format.  The 91st Bombardment Group has a Web site devoted to its history, from which the link is drawn.)

I recommend Mr. Jablonski's book.  It's long out of print, but used copies are still available.  He wrote several others about the air war in World War II, some of which I'm also reading as part of my research.

I read the first sentence and thought to myself, "I bet this is the story about the crewless B17." I couldn't remember the details or where I'd read it so it was nice to get a refresher.

They didn't mention the "nose art".

Was the aircraft named "Mary Celeste" by any chance?

Where is that aircraft? Is it still sequestered in some hanger; gathering dust?
I hope somebody had the foresight to secure those aircrafts for future generations.

I have that book, as well as Jablonski's two-volume set called "Airwar" about WWII aircraft in all theaters. I strongly recommend them, if such can be found. Mine are getting a bit threadbare & brittle.

The crewless landing is one of my favorite stories. Thank you for this update.

@ Rev. Paul - I'm using those three books in my research, right now. I recently found copies in a local used book store for $3.00 each! Talk about a bargain . . .

That's a great book - I picked it up 15 years ago in a used bookstore along with 'Monty Python and the Holy Grail (Book)'. Man, the little things you remember...