The last survivor of the Hitler bomb plot has died


I'm sure those of my readers who are interested in military and world history will be familiar with the bomb plot of July 20th, 1944, in which a group of conspirators attempted to assassinate Adolf Hitler by exploding a bomb at his East Prussia field headquarters. 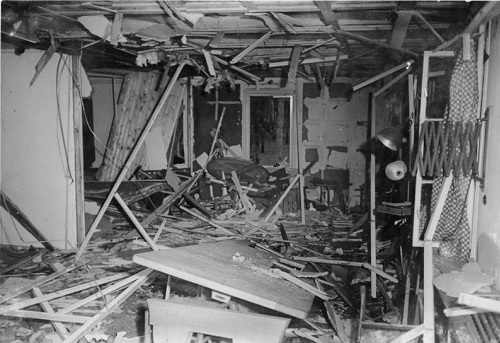 
The plot failed, and most of the plotters were arrested and executed.  Many died a slow, excruciatingly painful death by being hanged from nooses of piano wire.  Others were shot.

The last survivor of the plotters has just died.

Ewald von Kleist, who has died aged 90, was the last surviving member of the Stauffenberg conspirators, the group of Wehrmacht officers who hatched an elaborate plot to kill Hitler in 1944.

A lieutenant whose father had been an active anti-Nazi before the war, von Kleist was recuperating from wounds sustained on the Eastern Front when, in January 1944, he was approached by Colonel Claus von Stauffenberg, Chief of Staff to the Commander of the Reserve Army.

Knowing that von Kleist was due to meet the Führer to show him some new Army uniforms, von Stauffenberg proposed that he wear a suicide vest underneath, and detonate it when he stood next to the dictator.

Taken aback by this alarming proposal, von Kleist asked for a day to decide and travelled home to discuss matters with his father: “He said at once, 'Yes, of course you have to do it... A man who doesn’t take such a chance will never be happy again in his life.’”

“I had been quite sure he would say no,” von Kleist admitted later. “But, as always, I had underestimated him.”

Von Kleist agreed to go through with the plan, but, as luck would have it, Hitler kept postponing the meeting and eventually cancelled it; so the plotters had to return to the drawing board.

In July 1944 von Stauffenberg hatched a new plot in which he would leave a bomb under a table during a meeting of Hitler and his aides at the “Wolf’s Lair”, the Führer’s field headquarters in East Prussia. Von Kleist was among those instructed to be ready in Berlin to stage a coup once the plot had been successful.

On July 20, shortly after 12.30, von Stauffenberg walked into the meeting and put a briefcase containing the bomb, set to detonate in 12 minutes, under the conference table.

After a few minutes, pretending that he had to telephone Berlin, he left the room and hurried to a shelter across the compound to wait for the explosion. When it came, at 12.42, he bluffed his way on to a plane waiting to take him to Berlin.

For the next three hours von Stauffenberg was convinced that Hitler was dead. But one of the officers attending the meeting had barked his shin on the briefcase and moved it, so that a heavy table leg was now between Hitler and the bomb. While four people were killed in the explosion, Hitler escaped with only minor injuries.

When von Stauffenberg arrived in Berlin, the other conspirators had only just begun to put the coup plans into effect. Von Kleist, who at 22 was one of the youngest officers involved, was among those who arrested General Fromm, the head of the Reserve Army, at the War Office.

But news soon filtered through that the Führer had survived, and it was only a matter of time before the building was surrounded by troops loyal to Hitler.

Von Stauffenberg and three other conspirators were shot immediately. Others were subsequently hanged with piano wire from meat hooks, after being tortured by the Gestapo. (Hitler had some of the gorier deaths filmed for him to watch.) Eventually more than 5,000 people associated with the plot would lose their lives, including von Kleist’s father, who was executed in prison in April 1945.

Von Kleist himself was taken in for questioning by the Gestapo and spent four months in Ravensbrück concentration camp. However, the charges against him were eventually dropped, for reasons which remain unclear — though he was returned to front-line combat duties which, at that stage in the war, were considered the equivalent of a death sentence.

“The older I get,” von Kleist reflected last year, “the more it surprises me that I survived.”

His death brings down the curtain on one of the more unfortunate incidents of World War II.  The plotters' ineptness and lack of success ensured that literally thousands of Germans would be imprisoned and/or tortured and/or executed in the frenzied madness of Hitler's last months in power.  Would that they had planned better . . .