Lufthansa's just gone through an interesting exercise in weight reduction aboard one of their Airbus A340 long-distance airliners.  Aviation Week reports:

How much do all the loose items on board a long-haul airliner weigh (passengers and crew excluded)? After removing, weighing and cataloging everything not bolted down in the cockpit, cabin and cargo hold of an Airbus A340-300 just returned to Frankfurt from Rio de Janeiro, Lufthansa can say the answer is - almost 4 metric tons. 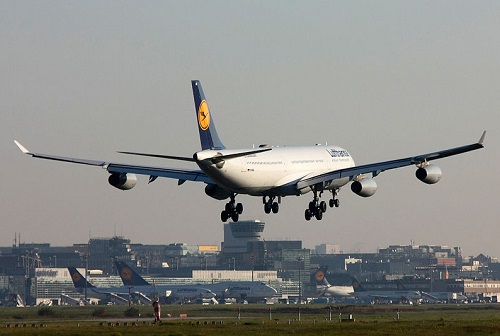 
After a team of almost 40 people spent more than 7 hours stripping the A340, Lufthansa plans to use the data to decide what should remain in board, and in what quantity. Although it does not yet know precisely what can be eliminated, the airline believes up to 10% of the items cataloged could be stripped from the aircraft, and estimates every 100kg [220 pounds] of weight removed would reduce an aircraft's fuel costs by €2.6 million (almost $4 million) a year.


There's more at the link, including an interesting description of how 'grooved paint' may save even more fuel.

Strange to think that a plane already weighing (and carrying) so many hundreds of tons can save so much fuel by offloading a relatively tiny proportion of that weight . . . but I guess that's airline economics!

The airline's quest to minimize weight caused the 9/11 hijackings to be so bad. I remember one airline president decades ago boasting that taking the olives out of the salads they served onboard saved $25,000 per year in fuel costs.

Airlines refused to reenforce the cockpit doors before 9/11. The extra few pounds of metal would cost them some trivial amount in extra fuel costs. Thus, the hijackers could force their way into the cockpits on 9/11.

Meanwhile today Marines injured in the line of duty have to take off their prosthetic legs for the TSA while President Obama's administration puts Saudi citizens on the fast track to get past TSA security as opposed to French or German citizens). After all, only 15 of the 19 9/11 hijackers were Saudi. Nothing to see here...

Peter,
I wonder if they're including weight distribution in their calculations. Even a small addition a hundred feet aft of the CG would add substantial trim drag, which is what affects fuel consumption as much as a minute increment of angle-of-attack.

During development of the 787, like most new aircraft, the projected weight went substantially over plan. The project engineers challenged every team to pull out "three pennies" worth of weight out of every box, saying that would take the extra tons. It did.

Makes me wonder if making the seats wider, to reduce the number of passengers per flight, would actually make up for the lost revenue.

The other thought I've had is that if on a 737, with seating 6 abreast, if they took out a column of seats, I'd happily pay 16% more for my ticket if I knew I was going to be on a flight that I could actually fit on.

But I might well be a vast statistical outlier, being 6'5" and 265 lbs, and having enough disposable income to afford 16% extra on plane tickets.