The US Air Force today celebrated the 60th anniversary of the first flight of the B-52 Stratofortress strategic bomber. The YB-52A prototype took to the air over Seattle, WA on April 15th, 1952. 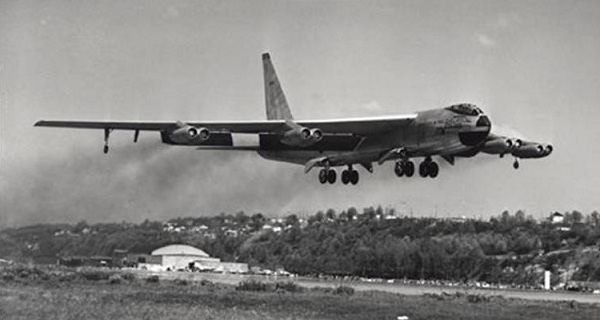 This was actually the second B-52 prototype. The first, known as the XB-52A, was being fitted with extra equipment, after which it flew in October the same year. Both the XB-52A and YB-52A were equipped with tandem cockpits, with the pilots sitting one behind the other. This feature was dropped in favor of a larger, side-by-side cockpit in production versions. 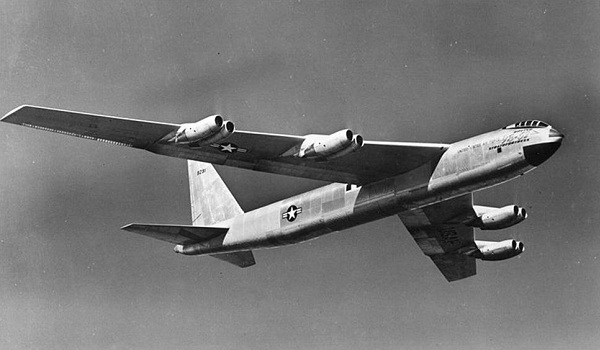 The USAF's Global Strike Command has issued a news release about commemoration plans for this famous aircraft's anniversary year.

The B-52's long and rich heritage is illustrated by stories of families who have up to three generations of Airmen who worked on the B-52, such as 1st Lt. Daniel Welch, a B-52 co-pilot at Minot. Welch is a third-generation crew member on the airframe.

According to Welch, his grandfather flew every B-52 model and commanded Welch's current squadron at Minot, the 23rd Bomb Squadron. Welch's father was also a B-52 crew member during his time in the Air Force.

Through the course of the year, the Command will highlight the history of deterrence and combat capabilities the B-52 has provided through its distinguished career, in conflicts from Vietnam to Operation Enduring Freedom.

Some accomplishments to be highlighted throughout the year include:

April 15, 1952 - The first flight of the YB-52 Stratofortress will be commemorated with a long-duration flight from AFGSC Headquarters at Barksdale.

May 10 through Oct. 23, 1972 - Operation Linebacker - Linebacker was the first continuous bombing effort conducted against North Vietnam since the bombing halt instituted by President Lyndon B. Johnson in November 1968.

June 18, 1965 - Operation Arc Light - The first use of the B-52D Stratofortress as a conventional bomber from bases in the U.S. to Guam to support ground combat operations in Vietnam.

Dec. 18 through 29, 1972 - Operation Linebacker II - This operation saw the largest heavy bomber strikes launched by the U.S. Air Force since the end of World War II.

The video clip below shows B-52D operations during Operation Arc Light over Vietnam.

The 'newest' or 'youngest' B-52 will mark its 50th year in USAF service this year. Airman reports:

“I don’t think anyone really knew this was going to be the last B-52 ever made,” said Robert Michel, the 5th Bomb Wing historian. “They expected it to be in service for probably about 20 years, (not close to) a hundred.”

With Tail No. 1040 and the rest of the Air Force’s B-52s scheduled to keep flying through 2040, there are several reasons why the B-52 has been flying for more than 50 years.

“I don’t think you can get a bomber that could replace the B-52 that will do everything the B-52 does,” Michel said.

That’s because the B-52 can perform nuclear deterrence and conventional operations, fly at both high and low altitudes while carrying nuclear and conventional bombs, cruise missiles or aerial mines, he said. “It’s like the Swiss Army bomber.”

To keep a fleet of aircraft flying for so long, it takes constant attention from maintainers to ensure the planes are every bit as airworthy as the rest of Air Force’s fleet.

“The aircraft has seen some really good maintainers through its years,” said Staff Sgt. Eric Thomas, a dedicated crew chief assigned to the 5th Aircraft Maintenance Squadron. “I think it’s a compliment to the maintainers and the people who support the airframe because there aren’t many aircraft that are flying 50 years after it left the factory. It’s definitely not the prettiest plane out there, but it can take a beating and keep on kicking.”

However, even with highly trained maintainers, keeping the B-52 flying day in and day out is no easy task.

When the aircraft was delivered to Minot, it looked much different than it does now. “I don’t think you would even recognize it as being a B-52H with the exception of the engines,” Michel said. “It would have been natural aluminum with maybe a tail number when it arrived. The B-52 has been continuously upgraded essentially since it came out.

“The only thing that’s original in our (H models) is the airframe itself,” he said. “Pretty much everything else has been gone through and updated.”

A 45-minute Discovery Channel documentary on the B-52 Stratofortress may be viewed on YouTube.

Congratulations to Boeing on the 60th anniversary of a great airplane!

Massive cool. Time to go watch me some Dr. Strangeglove, just for the B-52 parts.

I was at Okinawa for the tanker part of the Arc Light task force in '65, and then at Guam with the bombers. Both "D" and "F" models were used; ours (Carswell AFB) were "F" models. While on Guam we worked our butts off. There were often several days when we didn't bother to go back to the barracks. Slept on the flight line behind the blast fences and ate off the Roach Coach. Bought my "Benrus Wrist Alarm" wristwatch there for the purpose.

Ah, to be young again and able to do that...

I have heard some pretty amazing stories about how grandsons and sons have flown the same B-52 their grandfathers and fathers had flown before them. Think about that! Think about an airframe turning 100!

My father flew B-17's out of Eye, England during WWII and then B-47's and B-52's for SAC after the war. I was born in Texas when he was stationed at Ellington Field, and my younger sister in California when he was stationed at March AFB. He resigned his commission in '55 when my mother forced him to choose between her and the Air Force. (He had cause, later, to wonder if he had made the right choice.)

I didn't follow in his footsteps, though. Air crew (enlisted) in the Navy on S-2's, and later got a commercial helicopter rating as a civilian.

Those original XB-52A's anf YB-52A's "Tandem cockpits" were one of the carryovers from the B-47 designs.