Phantoms over the Baltic


There are many who remember the F-4 Phantom II fighter-bomber with nostalgia.  It's long gone from the operational squadrons of the US Air Force, but it's still in front-line service with a number of other nations.

The Luftwaffe, Germany's Air Force, periodically operates a flight of fighter aircraft as part of NATO's air policing mission in Lithuania.  The service still has some F-4F's in its inventory, although they're scheduled to be retired from service and replaced by the Eurofighter Typhoon next year. 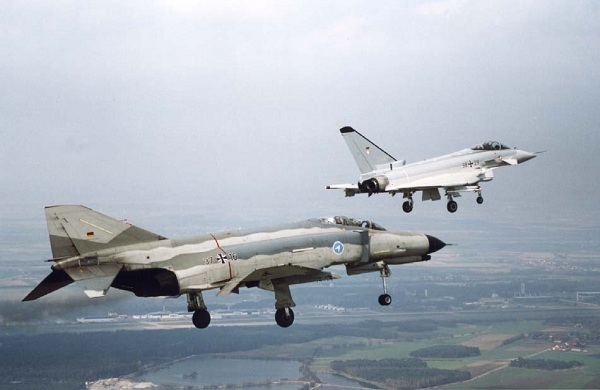 
A detachment of four F-4F's is currently on station at Siauliai air base in Lithuania.  Here's a video report, released by the Bundeswehr, showing a practice alert and takeoff.  The pilots and ground crew don't seem in any particular hurry, so they clearly weren't rehearsing for an emergency!


Considering that the F-4 first flew in 1958, it's quite an achievement to have it still in front-line service well over half a century later.

Any day with Phantoms in it is a good day. Nice post!

like your B52 posting the other day.
Funny how some things are so good there's no point in "upgrading" to the latest & greatest. I recall the arrival of the F-111s in AU service. We had 'borrowed' F4s as a stop-gap between when the F-111s should have arrived, and when they actually did. There was a lot of comment around that we should have just bought the F4s. would have got many more aeroplanes and reliability for a lot less money.

The F4 Phantom, proof that with enough thrust even a brick will fly.

Is there black smoke coming from the engines?

If Yes, Good.
If No, you have a problem.

Man... when I was in high school, having Phantoms flying out of an airbase in Lithuania would have meant that I should be digging a fallout shelter at my parents' weekend place in Mississippi.