This report warms the cockles of my aviation-loving heart! A grateful tip o' the hat to Diamond Mair for bringing it to my attention.

Twenty iconic Spitfire aircraft buried in Burma during the Second World War are to be repatriated to Britain after an intervention by David Cameron.

The Prime Minister secured a historic deal that will see the fighter aircraft dug up and shipped back to the UK almost 67 years after they were hidden more than 40-feet below ground amid fears of a Japanese occupation.

The plight of the buried aircraft came to Mr Cameron’s attention at the behest of a farmer from Scunthorpe, North Lincs, who is responsible for locating them at a former RAF base using radar imaging technology.

David Cundall, 62, spent 15 years doggedly searching for the Mk II planes, an exercise that involved 12 trips to Burma and cost him more than £130,000. 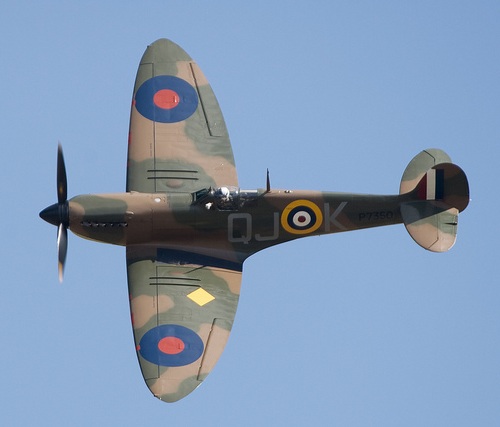 When he finally managed to locate them in February, he was told Mr Cameron “loved” the project and would intervene to secure their repatriation.

“They were just buried there in transport crates,” Mr Cundall said. “They were waxed, wrapped in greased paper and their joints tarred. They will be in near perfect condition.”

The married father of three, an avid plane enthusiast, embarked on his voyage of discovery in 1996 after being told of their existence by a friend who had met some American veterans who described digging a trench for the aircraft during the Allied withdrawal of Burma.

The report is incorrect in a few facts; for example, it speaks of the planes being buried in 1945, whereas British forces were forced out by the Japanese in 1942 (which is also the year in which the Mk. II Spitfires were in service in the greatest numbers - the Mk. V and subsequent versions took over from late 1942/early 1943). Nevertheless, if its main facts are correct, this is a treasure trove for historic aviation, particularly if the planes can be restored to flying condition. Given that the price of a restored Spitfire today can be anywhere from $2 million upwards, their discoverer is likely to come out of it a good deal wealthier, even after covering all expenses!

That's an incredible story. It's like they intended all along to dig them up, but someone, somehow, forgot.

“They were waxed, wrapped in greased paper and their joints tarred. They will be in near perfect condition.”

I can hardly wait to see them.

Incredible! I hope it's true. Myanmar (Burma) is not a very friendly or compliant Govt.

Fan-freaking-tastic! I want one!

If you scroll down in the article there is another story with a video of a MK1 Spitfire that crash landed in France and has been restored to flying condition.

Greetings from Texas,
This sounds great. Please keep us posted on this.