Here's our weekly look at other blogs that caught my eye recently.


In the light of recent concerns about security and self-defense, Legion's Fate has a timely post about carrying a firearm while accompanied by small children. He links to this video on carrying both a gun and a baby. Both his article and the video are very useful information for mothers in particular.


Semi Redneck also links to a YouTube video, this one on how to make a sheath for a belt knife out of standard PVC plumbing pipe. It's very useful if you have an odd-shaped knife without a sheath. I was amazed at how simple it was. He also made me giggle with '10 Thoughts To Ponder'. An example:

Number 5 - Health nuts are going to feel stupid someday, lying in the hospitals, dying of nothing.


SayUncle has named his gastrointestinal tract 'Sutherland'. Go read his article (and the first couple of comments) to find out why. (It's also giving him weird dreams - but after a pun like that, perhaps he deserves them . . . )


I'm of two minds about two otherwise excellent articles over at The Liberty Sphere. Both concern the dangers of a second term for President Obama - with which I fully agree. They are:

Time to Sound the Alarm - This is no Drill

After Midnight Musings: More Thoughts on the Danger Obama Poses,
Plus Impressions of Republican Challenges
The problem is that the author, Anthony Martin, fails to note that a Republican administration led by the likes of Mitt Romney is likely to be just as bad! The recent assaults on our Constitution didn't start with President Obama. The Bush administration had already comprehensively trashed the Bill of Rights with laws such as the Patriot Act - and it did so in part by continuing the trend begun by its predecessors. Obama is merely building on a foundation he found already laid for him. His successor(s), of either party, are likely to do the same.

My fundamental disagreement with Mr. Martin is that I don't believe the problem is Obama, or his successor, or Republicans, or Democrats. It's that almost everybody in our political system feels free to disregard the Constitution at their individual and collective whim and pleasure. The only solution I can see is to get rid of the whole damn lot of them, elect Representatives, Senators and a President who take the Constitution seriously, and go on from there. However, the chances of our being able to do that are vanishingly small, as few Americans seem to care about such basic principles. Most of our compatriots are too busy climbing on the 'bread and circuses' bandwagon to worry about such things. That's how we got into this mess in the first place!


My buddy Matt G. informs us about Ghetto Hikes, a blog on Tumblr. Its author notes:

I'm 28. I have a full time job leading urban kids (of all races) on nature hikes. I simply write down s*** they say.

Here are a few examples:

“E.J. back there havin’ a starin’ contest with da sun, slowin’ down the whole pack… homeboy shoulda gone to Space Camp.”

“Is rabbits eatable? Or you just s’posed to cuddle the f*** outta them?”

“Yo Mr. Cody, how many these mushrooms I gotta eat fo’ I Super Mario da f*** outta dis place?”

There's also the wonderful occasion when one of his youthful charges went hunting for snipes . . . which makes more sense if you know the origin of the expression, of course!


CenTexTim draws our attention to Fiverr, a Web site connecting inquirers with those who undertake to do something for small amounts of money, typically starting at $5. Here's a screen shot of some recent offers. 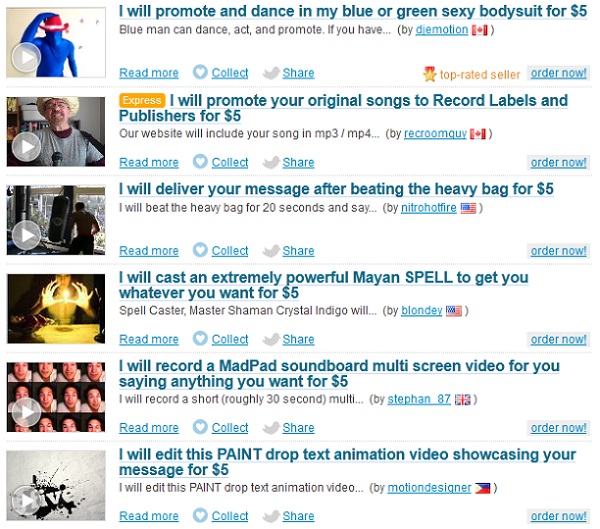 My only question: if that 'Mayan spell' is so powerful, why doesn't the spellcaster use it to provide him- or herself with all the money they need, thereby obviating the need to sell their services for a mere $5? (I know, I know . . . picky, picky!)


I've linked to his blog on at least one occasion in the past, but I recently came across Hawsepiper: The Longest Climb once more. It's written by Paul B., and covers:

"... Ships, Science, commercial fishing, marine biology and (mostly) true stories of life among the best and the worst people in the world, the United States Merchant Marines. You'll find it here, maybe. You'll definitely find rants, raves and discussion on the process of climbing the hawsepipe into an officer's job on a merchant ship."

Being a former nautical person (sort of - mainly courtesy of the South African military, with some leisure excursions aboard sailing yachts), I enjoy his stories. His latest endeavor:

Rumors exist that after just 3 more cargo loads, we'll be steaming back up north to New York to take up residency again as the bunker busters par excellence. Sadly, this is just in time for cruise ship season, which means fueling up these ugly-ass ships under the watchful eye of 3,000 drunks and other shitheads who try to throw lit cigarettes on my deck in an effort to blow us all up.

Miguel over at the Gun Free Zone has a (tall) tale about Russian military plans. It's definitely not politically correct, but it's all the funnier for that!


Julie in Australia, blogging at Jigsaw's Thoughts, informs us of a very interesting antibacterial invention. I'm going to look into this very seriously - I've been in enough Third World hellholes to know that something like this is of immense and very practical importance. With the growing number of antibiotic-resistant bacteria out there, it's likely to become just as important for first aid in the First World. Thanks, Julie!


Three articles about liberty, freedom and morality caught my eye, and provided much food for thought. Wraith, blogging at Weird And Pissed Off, wrote an article titled 'Language, NSFW. Concept, absolutely imperative'. In it, he linked to 'Scum**** Living In Babylon' (blog title and some contents definitely NSFW!), who wrote about 'How To Win My Sword'. He, in turn, linked to Kerodin at 'III Percent Patriots', who wrote an article called 'Moral Stupidity and the Realities of the Human Animal'. As I said, all three articles deal with similar subjects, and are useful food for thought. (I just wish some authors would use less profanity. It does nothing to make their arguments more acceptable, and alienates many of those whom they might otherwise persuade to their point of view. It's counter-productive, IMHO.)


Random Nuclear Strikes has a picture of the most awesome science project I've seen in a long time!


Tactical Tupperware reminds us of the need for 'estate planning' for our blogs.


Finally, the Mistress of Snark offers certain informative (and highly amusing) suggestions for how the game of golf could be improved. I'd add landmines to her list . . .

I've enjoyed this feature, Peter. Thanks!

Thanks for the link Peter ... was wondering why I got so much traffic :)