In my various articles about the economic crisis and what lies ahead, I've mentioned several times the threat of increased inflation as the result of so-called 'quantitative easing' programs, whereby central banks have created money out of nowhere (i.e. 'printed money') in an attempt to avoid 'credit crunches' and sustain government and private expenditure in difficult times. This, of course, has increased the money supply without any corresponding increase in the quantity, quality or value of goods and services produced by the economy. This means that more money is chasing the same quantity of goods and services, thereby raising their prices.

Despite the 'official' annual rate of US inflation being still in the low single digits, more and more evidence suggests that the real rate of inflation is much, much higher. Reuters reported last week:

World food prices are likely to rise for a third successive month in March, and could gain further beyond that, with expensive oil and chronically low stocks of some key grains putting food inflation firmly back on the economic agenda.

The United Nations Food and Agriculture Organisation (FAO) will update its monthly Food Price Index on Thursday and the organisation says prices could rise more in the short and medium term as grain supply tightens and energy prices stay high.

"You can see prices in the near term rising even further," FAO's senior economist and grain analyst Abdolreza Abbassian told Reuters ahead of the index update.

High crude oil prices have fuelled the upward pressure on inflation since the start of this year. Consumer prices in the 17 nations sharing the euro were up 2.6 percent in March from a year ago, despite stumbling economy.

"The food price index has an extremely high correlation to oil prices and with oil prices up it's going to be difficult for food prices not to follow suit," said Nick Higgins, commodity analyst at Rabobank International.

Energy prices affect the production of fertilizers as well as costs related to food distribution and farm machinery use.

The rising oil prices referred to in the Reuters report are, of course, at least partly caused by the money supply growth I mentioned earlier. There are more dollars chasing the same number of barrels of oil; so the price of the latter inevitably goes up. Food inflation is just one of the 'spillover' effects. Its existence was confirmed by General Mills in its recent third-quarter earnings report.

General Mills came out Wednesday with their Q3 earnings, and what do you suppose was one of the top points they wanted to make to their investors? Just that they were experiencing significantly higher input costs year-over-year.

As a matter of fact, they say that YOY inflation input costs were actually higher by ...

So is it deflationary for the consumer if the 3rd biggest food company in America is experiencing double digit inflation?

I might add that the inflation input costs of 10%-11% reported by General Mills correspond very closely to the actual rate of year-on-year consumer price inflation, as reported by John Williams of Shadowstats. He uses traditional methods to calculate inflation (the same as those used by the US Government prior to 1980, after which politicians began 'tinkering' with them in order to deceive their constituents). Mr. Williams sees our current inflation rate as follows: 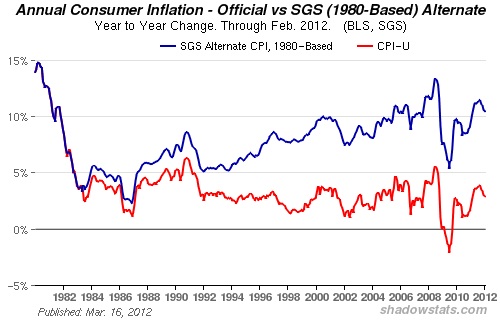 One interesting side effect of economic crisis, inflation and currency turmoil in Europe is that an unofficial or 'underground' barter economy appears to be taking root, certainly in Greece, and probably in other troubled economies as well. For example, the Guardian reports:

In recent weeks, Theodoros Mavridis has bought fresh eggs, tsipourou (the local brandy: beware), fruit, olives, olive oil, jam, and soap. He has also had some legal advice, and enjoyed the services of an accountant to help fill in his tax return.

None of it has cost him a euro, because he had previously done a spot of electrical work – repairing a TV, sorting out a dodgy light – for some of the 800-odd members of a fast-growing exchange network in the port town of Volos, midway between Athens and Thessaloniki.

In return for his expert labour, Mavridis received a number of Local Alternative Units (known as tems in Greek) in his online network account. In return for the eggs, olive oil, tax advice and the rest, he transferred tems into other people's accounts.

"It's an easier, more direct way of exchanging goods and services," said Bernhardt Koppold, a German-born homeopathist and acupuncturist in Volos who is an active member of the network. "It's also a way of showing practical solidarity – of building relationships."

He had just treated Maria McCarthy, an English teacher who has lived and worked in the town for 20 years. The consultation was her first tem transaction, and she used one of the vouchers available for people who haven't yet, or can't, set up an online account.

"I already exchange directly with a couple of families, mainly English teaching for babysitting, and this is a great way to extend that," said McCarthy. "This is still young, but it's growing very quickly. Plainly, the more you use it the more useful to you it gets."

The beauty of such transactions (from their participants' point of view) is twofold:

There are already voices supporting the establishment of just such a 'barter economy' here as well. Call it the 'black market' if you will, but I suspect it's already here!

Inflation is a tax... no bones about it... and we have been VERY heavily taxed in the last few years. Very few people understand that, and I suspect that is exactly what politicians are counting on.

No figures, of course, but I expect that the off-book economy is well north of a trillion dollars a year.

If you tax something, you get less of it ...

Barter is the way to go, it's really helpful to have a marketable skill, of course!

I wonder who sets the "prices?" e.g., who determines that one hour of an electrician's skilled labor equates to a bushel of grain or 60 eggs or whatever?