We need a stronger bug spray!


I'm intrigued to learn of the deployment of a new micro-UAS (unmanned aerial system) by the British armed forces. KitUp reports:

A team of SF operators is postured outside a compound in downtown Kandahar. Intel has led them this far; inside the compound is a Taliban commander responsible for numerous civilian and military casualties. It’s unknown who else is inside with him; heavily armed fighters, a suicide bomber, or innocent women and children? One of the operators rips a device the size of a book from a pouch and flicks it open. He takes out a tiny 15 gram nano-UAV, snaps the rotor blade onto the body and throws it in the air. 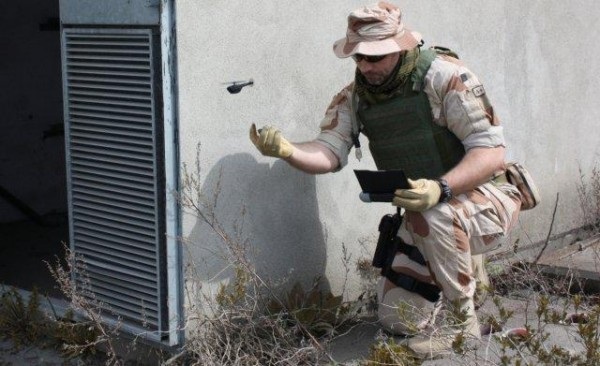 It shoots up and over the mud-brick wall, the onboard camera beaming a clear picture back to the screen in his hands. Unseen it silently zips past four armed guards in front of the main building and enters through an open window. Inside a group of men are holding a shura. The target has been identified! With a crump the team breaches the compound and rapidly overwhelms the security detail. They make a bee-line for the room containing the target. Moments later the dust has settled and the objective is zip-tied, hooded and ready for processing.

Wanting to learn more, I found the Web site of the developers of the little craft, Prox Dynamics. It's a Norwegian company, describing itself as follows: 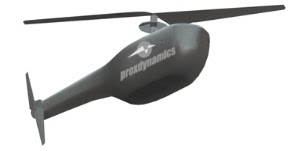 Prox Dynamics was founded by Petter Muren in December 2007, and builds on many years of experience in micro helicopter technologies. Petter was the first to design a passively stable helicopter rotor system that later formed the basis for radio controlled toy helicopters. He worked several years as a consultant for a major Nano Air Vehicle project before he put his ideas into his own company.

Developments in micro electronics, especially in mobile phone and battery technologies, have made it feasible to develop advanced flying platforms that weigh just a few grams. Teaming up specialists in video and signal processing, hardware design and operational know how created the necessary foundation for the company. During 2009 the company more than doubled in size creating the largest UAS Company in Norway.

Here's a 2009 promotional video from Prox Dynamics. As you can see from the photographs above, their 'aircraft' is now even smaller and more aerodynamic than the prototype shown below.

I suppose the next 'advance' in such technology will be for someone to develop a special version of Raid, or some other insecticide, to take down such UAS's as they fly past! Perhaps this might be a new application for Silly String? After all, it already has other military uses!

A tennis racket would take one down quite nicely.

Another vaporware project paid for by DARPA.

Reminds me of a briefing on robots I attended in about 2007. Company said how the Afghans would all run away when they put there robot into a cave.

The O-4 from the 82nd sitting next to me chuckled. In war games no robot lasted more than 5 minutes. Troopers lit them up as soon as they entered the kill zone.

LOL. Silly string was the very first thing I thought of. Thar be fun to be had.

But can a HELLFIRE be mounted to the hard points... oh wait - no hardpoints