I'm sure many readers remember the Los Angeles riots of 1992, including the infamous Reginald Denny incident, which was featured on TV news reports all over the world.  (I watched it in South Africa, and remember thinking that LA was getting more and more like some parts of South Africa in terms of civil unrest!)  They began on April 29th, 20 years ago tomorrow (Sunday). 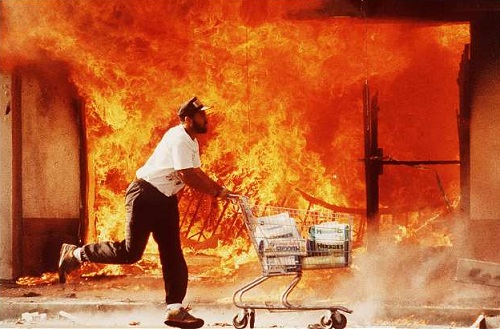 I've read a number of reports of what it was like to be in the middle of those riots.  Perhaps the most graphic account (although some have questioned its veracity in parts) was recently republished on the Bonnie Gadsden blog, in ten parts.  Here are the links:

News media are bringing us retrospective reports and commentary to mark the anniversary.  For those who want to view them, there are many video clips about the riots on YouTube. 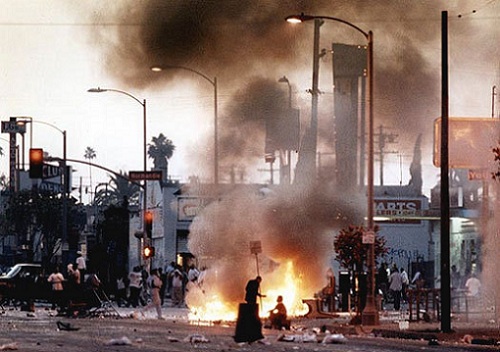 I can't help thinking that the recent decision to charge George Zimmerman with murder for the shooting of Trayvon Martin was motivated, at least in part, by a desire to head off community anger and prevent a repeat of the LA 1992 riots in Florida.  If Mr. Zimmerman is found not guilty, I won't take any bets that the urban underclass won't engage in similar conduct.  They haven't changed much . . .

(That remark, by the way, is not racist.  Video of the 1992 riots demonstrates clearly that looting and mob violence were not confined to only one race;  although the majority of participants appeared to be Black, there were also Whites and Asians involved.  I'm sure that if similar problems arise in Florida, the same will be true there.  Membership of the 'underclass' is a matter of attitude and ingrained culture, far more than skin color.)

At least 54 people died in the 1992 riots, and thousands were injured.  Let's remember the victims at this time, and pray that there won't be any more, anytime soon, in this troubled and divided nation.

Amen, Brother Peter. But, like you, I don't think anything short of a guilty verdict will keep the mob calm....Sharpton, Jackson and the Panthers ( not to mention Obama!) have seen to that.... JohninMd(help)

I lived in LA during those riots and it amazes me how stupid people are that go on rampages and destroy neighborhoods and businesses after trial verdicts, or sports events. It is so incredibly ignorant, and has such far-reaching consequences. In this case it will be a further division among this nation, on the basis of color, instigated by left-wing political goals.
I'm so glad I moved to the hills. It's a little more difficult and time-consuming, but a lot safer and 100% more pleasant than having to drive through chaos and potential physical harm.

The state prosecutor in the Zimmerman case is simply doing an impression of her counterpart in the Duke Lacross team rape case. With one zinger.

It's almost guaranteed she won't get a 2nd degree murder conviction. Manslaughter, perhaps, but 2nd degree is simply way to hard to prove (according to liberal law professor Allen Dershowitz). That means Zimmerman is almost definitely going to walk, which means... well, it might be a good time to avoid inner cities.

Any day is a good day to buy ammo--except the day trouble starts.

So this is why the Trayvon Martin case has been hyped up so much. The media wants a repeat.

The riots will be good for network ratings and provide the Dems with a strong campaign slogan.
"Vote for our candidate and no more cities burn"

If people want to protest that is their right. When it turns violent the appropriate level of force should be used to stop it, You throw rocks, you brought a rock to a gun fight. You want to burn buildings you better get it lit before the sniper takes you out. The riot breaks out you get on the television and a sound system and you tell the crowds that a state of emergency has been declared and that anyone on the streets will be arrested and if they are violent they will be shot. After half a dozen or so are carried off in body bags the rest will get the hint and go back to their free housing.

The one thing the underclass may not be counting on: a greater percentage of the population that owns and carries firearms in Florida than LA in '92.

The media most assuredly doesn't care, as long as they get their story; the poor fools who get led willingly into rioting by eager journalists, community organizers, anarchists, professional victims, and spin artists will be the ones in body bags.

One of th more poignant film clips I recall was from the after-math in L.A., --people lined up in front of a burnt-out Post Office on the next "mother's day" (the 1st or the 15th ) wondering where they were going to be able to collect they're welfare checks at..... JohninMd(help)