A reversal of tattoo fashion?


I had to smile when I came across a 2009 article, reporting that tastes for tattoos in China appeared to be changing.

Tattoos of Chinese characters have long been a fad in the West as a way of denoting the mystique of their bearers.

But in a reversal of the trend, Chinese ink parlours are reporting a sudden craze among their clients for tattoos in English. 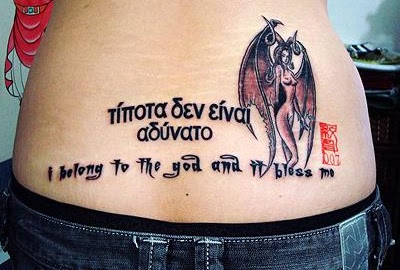 Zhang Aiping, a tattooist at Tattoo 108 in Shanghai, said: "Around 30 per cent to 40 per cent of our customers are choosing tattoos in English letters now. This has happened really suddenly, since the beginning of this year.

"I just did one a few days ago for a footballer at Shanghai Shenhua club. It said: 'I miss u forever'."

Tattoos have existed in China for thousands of years, but have been largely taboo under Communist Party rule.

Only in the last five years have scores of tattoo parlours sprung up, operating in a grey zone of legality.

Chinese clients have been inspired by footballers such as David Beckham and American basketball stars.

Mr Beckham sports a tattoo in Chinese characters, inked on a trip to Hong Kong, which reads: "Death and life have determined appointments. Riches and honour depend on heaven".

Others have been less felicitous with their choice of Chinese words, with combinations that leave native speakers scratching their heads.

One Chinese tattooist said he had seen a Westerner with the character meaning "gas" on his arm, instead of "spirit".

I've always laughed at stories of Westerners having a Chinese or Japanese character tattooed on a part of their body, claiming that it meant something profound, or courageous, or inspiring - only to find out that it actually meant "Eat At Joe's", or "I'm An Idiot", or something like that. I wonder how many Chinese have been similarly misled by their tattooists, and are now walking around with a tramp stamp saying something like "Kick Me!"?

I have a small Chinese symbol tattoo, inked in a moment of teenage rebellion. The symbol was correct when I got it, but has now been cut through and stitched back together (without any care to match up the lines) during four different surgical procedures. We joke that it probably says something quite offensive now.