Earlier this month the five surviving veterans of the Doolittle Raid gathered in Dayton, OH to commemorate the 70th anniversary of the operation.  Also in attendance were 20 B-25 Mitchell bombers, the type of aircraft that performed the mission.  You can find many photographs of them at the Airpigz blog report of the event.  Historic photographs of the departure of the bombers from the USS Hornet may be found at this US Navy commemorative Web page. 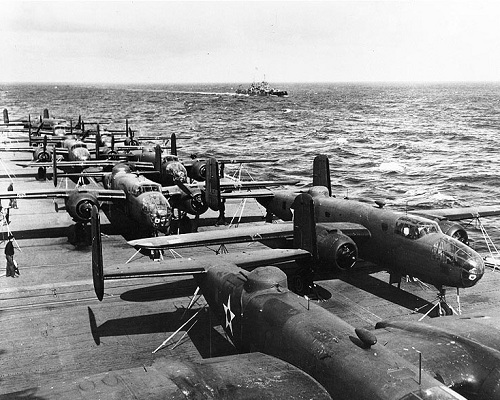 
Nineteen of the B-25's provided a formation fly-past over the National Museum of the United States Air Force in Dayton, Ohio on April 18th, 2012.  Here's a great video of the occasion, filmed from inside one of the participating B-25's.  I highly recommend watching the video in full-screen mode - and adjust your computer's speaker volume to hear those lovely radial engines!


What a great piece of living aviation history!

May the many Doolittle Raiders who are no longer with us rest in peace, as well as all those killed during and after the raid (particularly the quarter of a million Chinese murdered by Japanese armed forces during their search for the raiders).

A few years ago our son, as part of a school history class project, participated in a re-enactment of Doolittle's Raid, He and his buddies built a mockup of a B-25 cockpit, scrounged together something resembling the uniforms of the time, wrote the script, and performed it in public. A few days later they got a phone call from one of the then-surviving Raiders. He lived in the area and saw a news story about the re-enactment. The kids (and their parents!) got to visit him and hear first-hand stories about the raid and its aftermath. What a thrill -- and honor. He still talks about it today.

And most of the B-25 pilots and crew had severe hearing loss since there was no sound insulation and the radial engines' exhaust pipe(s) were beating a savage tattoo on the thin aluminum just inches from their heads. The headsets were for communication and not noise-cancelling. I went up in one a few years ago and even with shooting Peltors over my ears, it was LOUD!