Has the Defense Department lost its collective mind?

The U.S. government now projects that the total cost to develop, buy and operate the Lockheed Martin Corp F-35 Joint Strike Fighter will be $1.45 trillion over the next 50-plus years, according to a Pentagon document obtained by Reuters.

The Pentagon's latest, staggering estimate of the lifetime cost of the F-35 -- its most expensive weapons program -- is up from about $1 trillion a year ago, and includes inflation. 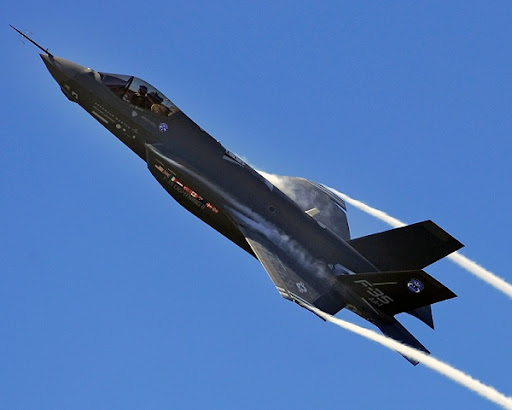 The new cost estimate reflects the Pentagon's proposal to postpone orders for 179 planes for five years, a move that U.S. official say will save $15.1 billion through 2017, and should avert costly retrofits if further problems arise during testing of the new fighter, which is only about 20 percent complete.

The Pentagon still plans to buy 2,443 of the new radar-evading, supersonic warplanes, plus 14 development aircraft, in the coming decades, although Air Force Secretary Michael Donley last week warned that further technical problems or cost increases could eat away at those numbers.

The new estimate, based on calculations made by the Cost Assessment Program Evaluation (CAPE) office, includes operating and maintenance costs of $1.11 trillion, including inflation, and development and procurement costs of $332 billion.

The Government Accountability Office last week projected it would cost $397 billion to develop and buy the planes, up from its earlier forecast of $382 billion.

The new baseline forecasts the average cost of the F-35 fighter, including research and development (R&D) and inflation, at $135 million per plane, plus an additional $26 million for the F135 engine built by Pratt & Whitney, a unit of United Technologies Corp.

In 2012 dollars, the average cost of each single-seat, single-engine plane, including R&D, would be $112.5 million, plus $22 million for the engine.

The numbers bandied about in the report above are so mind-boggling as to be ludicrous. They also beg comparison with more cost-effective weapon systems. Consider that the newest Arleigh Burke class destroyers for the US Navy cost 1.843 billion dollars each - the equivalent of less than a dozen F-35's. At current prices, the cost of the same destroyer would buy two and a half times more (i.e. almost 28) Boeing F/A-18E/F Super Hornets, currently the most advanced pre-fifth-generation multi-role fighter aircraft in US service. Can the smaller quantity of F-35's make up for their lower numbers with superior performance? I somehow doubt it.

There's also the question of the operating costs of the F-35 versus contemporary aircraft. A 2011 report on US Air Force aircraft operating costs (link is to an Adobe Acrobat document in .PDF format) compiled by the Center for Defense Information noted:

The 2010 F-35 Selected Acquisition Report purports a $15,190 cost per flying hour for the F-35A, not including indirect costs. It is a cost just 15 percent above an allegedly commensurate cost shown for the F-16C/D. Further DOD analysis purports a total operating and support cost for the entire F-35 fleet of $915.7 billion.

These cost estimates are simply not credible. While the F-35 lacks a second engine or a thrust diverter for in-air maneuvering, in other respects it is much more complex than the F-22: multi-role design; STOVL, and several millions of additional lines of software code are major issues). The F-35 will be lucky to stay under the F-22’s currently reported $55,000 CPFH estimate.

Again, more at the link. The CDI's forecast has just been at least partially confirmed by the latest information released by the Defense Department. It's provided the following hourly operating cost figures for the F-35 (which is, of course, still not operational, so these numbers are 'guesstimates' at best):

Those figures are already well over twice as high as those forecast as recently as 2010 (as cited above), which makes the CDI's forecast of an average $55,000 cost per flying hour in future much more realistic and believable.

I have only one question for the Defense Department. In an era of diminishing budgets, cost constraints, and a debt mountain that threatens to overwhelm the entire US economy, just how the hell does it think we're ever going to afford even half the amount it glibly projects the F-35 program will cost the nation?

It's not going to happen. You can take that to the bank right now. That sort of money cannot and will not be made available for the F-35.

The question then becomes, what should be done with the program? My answer is simple. Since the F-35's costs, deadlines, etc. have defied forecasts, contractual commitments and promises, and gone up many times over, it's time to kill the damn thing altogether. Stock up on a few hundred more 'legacy' aircraft, at lower costs, and keep the F-22 production line running to produce a couple hundred more of them, while we start planning for a sixth-generation fighter to come on stream in the 2020's. The F-35 boondoggle has gone beyond a joke.

Greetings from Texas,
We need the best fighter for the job. The Lighting II ain't it.

And it doesen't have gun. WTF? CAS, what CAS?

You can thank the Lockheed business plan for this as this is a duplicate of how they escalated the F-22 into the obscene price range.

What people fail to recognize about buying Aircraft, be they Fighters, Bombers, Tanker or Cargo: they are all consumable items in war time. We design them with “escape” systems for what was supposed to be the most important and expensive part, the human operator (s). But no more, the raw aircraft is worth more than its weight in un-obtainum (it being way more expansive than gold or diamonds). You have to plan that many of these single-engine aircraft will simply fall out of the sky. That happens and then there are bird strikes (how many B-1’s have been lost to those, my last count was 2) and idiot drivers flying them into the ground (can’t even give you that count but it happens all too often).

Yeah, kill the program and you have to Fire people in the government who Managed and lead this program to failure. And you have to ban Lockheed from bidding on future contracts until they learn how to bid or manage to the contract. They always get the out approved from government and they never see a penalty for their mismanagement. And they owe all of us as taxpayers for these ungodly priced consumables.

The F-22 has had it's share of issues, but now that it's finally getting past that, it's production is stopped in favor of a larger and more embarassing boondoggle?

I am constantly amazed at what LockMart gets away with.

Since the F-35's costs, deadlines, etc. have defied forecasts, contractual commitments and promises, and gone up many times over, it's time to kill the damn thing altogether.

Since when is that reason enough for the fed.gov to kill a project?

Ahh Peter: you sound naive, and I know you're not. The JSF will continue because it is in production (which the F-22 is not). And thanks to software-driven systems, it brings capabilities to the game that are simply mind-boggling, in air-to-ground as well as air-to-air. The DoD will likely reduce quantities bought, but that comes with the force reductions we all know are coming.

I've been a participant/observer at the Pentagon for so many of these controversies over the last 30 years that I weary of them. I just wish people who comment about the situation would consider precisely what they're talking about. When CAPE estimates a total program cost, they include RDT&E and purchase (a small part of program cost) plus operating and maintenance expenses. Plus the cost of pay and allowances for the people who fly and maintain, plus fuel for 30 years, plus new hangars at new bases, etc etc etc.

Perspective is needed. After I got my wings, I was paying $0.32 per gallon of gas for my car when my Ops Officer at my first tactical squadron at Cherry Point walked me out to the flight line for my Fam-1 in the A-4B. He cautioned me "this aircraft cost the taxpayers over $750,000--don't "mess" it up."

And the future--thanks to our chronic inability to control our spending--will make the F-35 look affordable in a decade or so.

no chance of restarting the F-22 line now...all parts, jigs and tools have been shipped to storage.