The annual Oktoberfest has kicked off in Bavaria with more than the usual pomp, ceremony and oompah. This year marks the 200th anniversary of the event, which began in 1810. To commemorate the occasion, the festival's been extended for two days, and historical reconstructions of old-fashioned beer tents have been set up to wow the tourists. 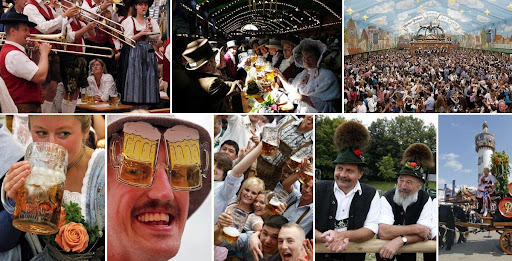 The breweries of the region have also combined to make this year's celebration special. Instead of each brewing their own beer, and competing for sales at the festival, they've joined forces to brew a special ale from an original recipe dating back to the early years of Oktoberfest.

The record for visitors to Oktoberfest stands at 7.1 million, and that for beer served at 6.9 million liters. Organizers hope to break both this year. (That's not to mention the thousands and thousands of tons of various kinds of wurst, poultry, breads, confectionery and other edibles that'll be consumed by festival-goers.)

Damn, I'd like to be there . . . Not this year, I'm afraid, but Oktoberfest is on my list of things to do before I die.

If you have the chance, I would recommend the Volksfest in nearby Stuttgart over the Oktoberfest. Same good beer, music and food, less touristy.

You guys can have Oktoberfest, I am holding out for Fasching...I'll go as a rich American and see how lucky I can get...

Fasching was pretty cool too. Especially the clubs that spend all year on their costumes, really good time was had by all.

Went there back in 1986, and hung around at the Lowenbrau tent and kept a beerstein as a memento. Still have the beerstein;)

Wow, I thought "Beer goggles" was just a metaphor!

Went there - two weekends! - in 1996 - first time with spouse, second time after she had to come home (I was working on a contract job in Ruesselsheim, she came over to visit for two months - Munich was our last weekend trip before her scheduled return to the U.S.) - I still have one of the three 2-liter (!!) steins I "acquired" on that second go-round.

It got pretty drunk out, pretty early, that last weekend...

When (not if) you go - definitely have a barbecued-ox sandwich, and at least one of the huge steins of Marzbrau the brewed-for-the-Fest draft beer that's kellered earlier in the year and has been gaining strength all summer.

It's not quite as all-out-madness, I've been told, as Fasching - but you haven't really seen a thoroughgoing beer-bust, until you've seen an oompah band - in lederhosen - playing away while riding around and around a giant-swing carnival ride.